Starbucks' artistic approach to foam art is called into question.

Ah, remember yesterday, when no one on the Internet knew what was real and all the jokes felt so natural and fun? Of all the April Fools’ Day shenanigans we endured, Starbucks might have actually had the best (real?) joke.

Louisiana school teacher Megan K. Pinion, a customer at a Baton Rouge Starbucks, apparently posted a photo to Facebook on Sunday (now deleted), claiming her lattes were served to her with satanic symbols drizzled in caramel. The photo, of course, got close to 2,000 likes on Facebook. 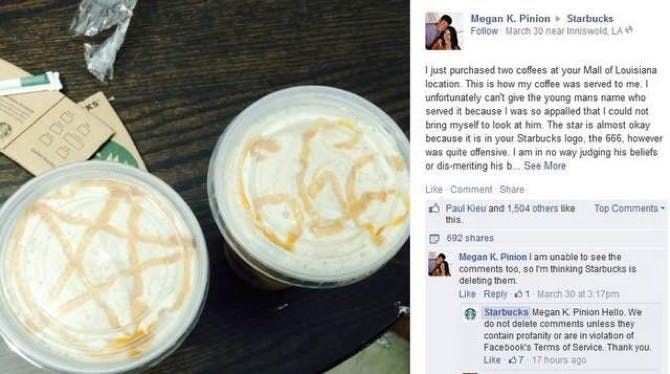 The customer did not get the barista’s name, but she did critique the artwork:

“I unfortunately can’t give the young mans name who served it because I was so appalled that I could not bring myself to look at him. The star is almost okay because it is in your Starbucks logo, the 666, however was quite offensive. I am in no way judging his beliefs or dis-meriting his beautiful artwork, I am however judging his lack of professionalism and respect for others. I am a teacher in the public school system and if I were to present a child of atheist or pagan believers with a Christian art project I could be sued in a heartbeat.”

You’re right to assume this is probably the funniest thing Starbucks has ever done, but they had to apologize to the customer (because the customer’s always right.) Social media spokesman Tom Kuhn claimed they contacted her:

“We reached out to her through social media and apologized. We’re taking the complaint seriously. We’re not sure who served her or what kind of beverage it was. It looks kind of caramel-ish in the photos.”

The formal statement from Starbucks:

“We have sincerely apologized for her experience. This obviously is not the type of experience we want to provide any of our customers, and is not representative of the customer service our partners provide to millions of customers every day.”

When asked if this incident could change their approach to foam art, Kuhn stated, “I don’t know. I guess it could.”