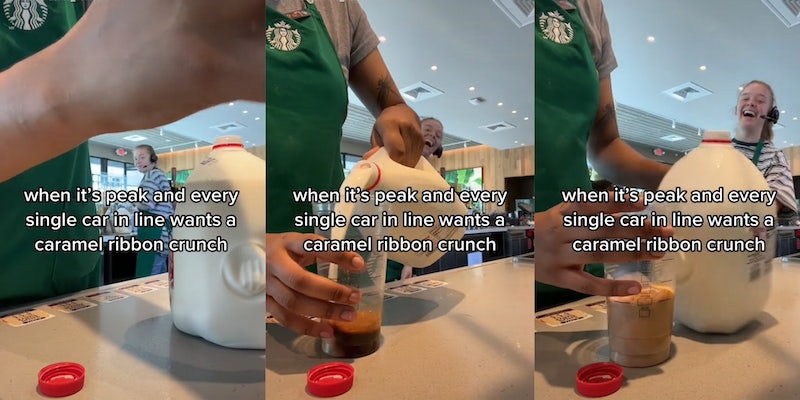 'These are fun to make if there’s only one person.'

If you order an elaborate Starbucks Frappuccino, be aware you may be causing a nightmare for the barista behind the counter.

Starbucks TikToker @kohakunushis_version highlighted this issue with a viral TikTok captioned, “when it’s peak and every single car in line wants a caramel ribbon crunch.” The video shows a barista making the drink while their co-worker laughs in the background, accompanied by a soundtrack with the lyrics, “sometimes I wake up and wanna kill myself.”

The Caramel Ribbon Crunch is one of the more complicated drinks on the Starbucks menu, involving layers of coffee, ice, milk, caramel sauce, whipped cream, and toppings. So if a whole bunch of customers order them in quick succession, it’s easy to see why baristas would be annoyed. There’s a lot of pressure to keep that queue moving.

This TikTok had commenters divided, with some accusing Starbucks workers of complaining too much while others expressed sympathy.

“I’m so glad my Starbucks workers don’t Complain like this,” wrote one commenter, while another pointed out, “y’all blame them for complaining but also Starbucks is a multibillion $ company. they can afford to make it easier for EVERYONE.”

Meanwhile, another person added, “these are fun to make if there’s only one person but once there’s a line it’s not a game.” If you’re wondering why this specific drink deserved this call-out, other Starbucks baristas have filmed the whole process behind making one. It’s a lot!

@hannah.suniga one more for tonight 🤪. one of my fav drinks to make! #starbucksdrinks #barista #starbucks ♬ I know you want me – PITBULL

So yes, while some people are annoyed by Starbucks workers complaining about a pretty basic part of their job, you can see where @kohakunushis_version is coming from.

The Daily Dot has reached out to @kohakunushis_version via TikTok comment.