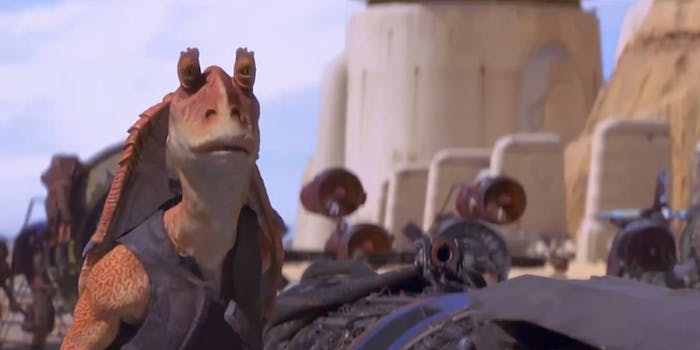 Taking the menace out of 'The Phantom Menace.'

Out of all the deleted footage coming out from the Star Wars movies, this is the one we wanted most of all.

Jar Jar Binks’s presence in The Phantom Menace as a comedic sidekick ruined what many saw as an otherwise adequate film. Many fans can’t stand him, and although George Lucas defended him, his role was greatly reduced in the later films. But thanks to some clever editing, fans might finally get some peace.

In the deleted scene, Qui-Gon and Obi-Wan defy physics as they escape their vehicle close to a waterfall while holding onto nothing more than a wire attached to a wall.

What happens next goes against everything we know about Gungans, but if you hate Jar Jar Binks, it’s a satisfying end to an annoying character.

It’s not the original deleted scene as Lucas intended, and Jar Jar Binks ends up being a vital and polarizing character, but it’s nice to dream. Here’s hoping the JJ Abrams–helmed sequels don’t require as much careful editing to fix.