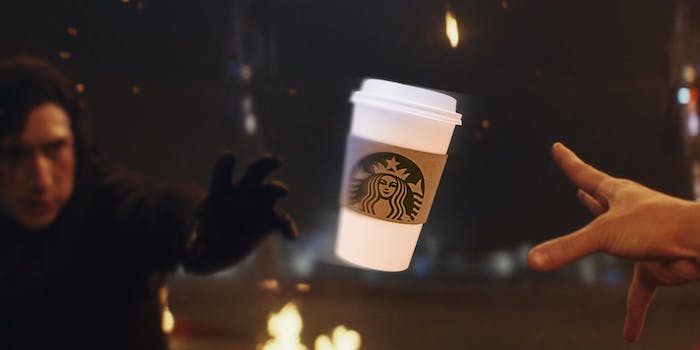 Yes, Kylo Ren would probably use an AeroPress.

Despite the many qualities that make the Star Wars universe different than ours (like its technology, lightsabers, and the Force), we have much more in common than we’d think. For one, people probably also have very strong opinions on how to take their coffee.

Fortunately for them, coffee already exists in Star Wars. Referred to as caf, it essentially works the same way that coffee does for us: It’s hot, sometimes bitter, and can keep us awake. While it’s been mentioned in a couple of the animated series and several tie-in novels, caf has never appeared in a Star Wars film, so we’re left to wonder what characters like Luke, Leia, Han, Rey, and Kylo Ren might take when they need a proper pick-me-up on-screen. Thanks to Violet Wilson, we now have some ideas.

Her thread is a fictitious spin on the Celebrities As Things meme, in which various celebrity photos are paired with different objects. In this case, Wilson is using several different Star Wars characters from the films to pair them with different kinds of coffee, caffeinated beverages, or straight-up caffeine options that they might take.

In some cases, like with Darth Vader and Kylo Ren, it’s much more of an aesthetic choice. Vader’s choice is simple, while Kylo’s is much more complicated. (And yes, if you’re wondering, Ben Solo’s taste in coffee changes when he’s redeemed.)

In other cases, it’s about matching the beverage type to the personality. General Hux drinks tea because he thinks that he’s above coffee while Rey’s choice of a simple gas station coffee is practical, as is Finn’s choice of a Keurig cup. Padmé isn’t the only character to opt for a more complex brew. Meanwhile, R2-D2 will take his sweet time getting his cup of coffee, and Luke makes himself matcha tea.

In some cases, the characters will choose to cut out coffee completely. If anyone could get away without a caf or coffee fix, it’s Leia Organa, whose command of the Rebellion and Resistance look seamless. On the other hand, BB-8 is basically running on pure caffeine. And Palpatine will go straight for the beans.

It’s the kind of thread that links in several sweet spots. It’s great headcanon and fanfic fodder as well as a lighthearted way for us to explore Star Wars without wading into any of the elements that might spark a more heated discussion, especially while we’re all quarantined. It’s a reminder that for many of us, there are a lot of great coffee options to try when we’re able to visit coffee shops again.

And also, diners already exist in the Star Wars universe. We’re really just one cup away from kicking off a canonverse coffee shop AU.