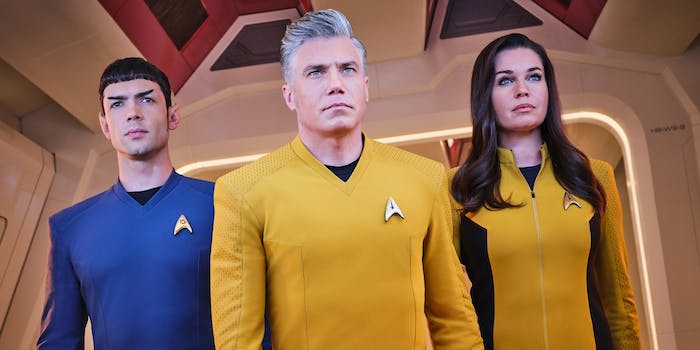 Uhura, Spock, and Captain Pike co-star in this fun spinoff.

After the longform, high-stakes storytelling of Star Trek: Discovery and Picard, the franchise returns to its roots with Strange New Worlds, a series of single-episode missions balancing goofy adventures with earnest social commentary. Like classic Trek, it spends a lot of time building friendships among the crew, often in lighthearted and comedic ways. The mood is uplifting and occasionally hokey. In the five episodes made available for review, the first was clunky while the next four ranged from delightful to amusingly corny. Simply put: I love it.

My main concern for Strange New Worlds was the potential for it to be a nostalgia-fest, which in some ways it is. Spinning off from season 2 of Discovery, it’s another chronological prequel to the Original Series (TOS), starring the precursors to Kirk’s Enterprise crew.

Captain Pike is positioned as a supportive, reliable father-figure to his crew, played with incredible charisma by Anson Mount. Like in the unaired TOS pilot, he’s joined by Una/Number One (Rebecca Romjin) as his second-in-command, and Spock (Ethan Peck) as his science officer. Dr M’Benga (Babs Olusanmokun) and Nurse Chapel (Jess Bush) are upgraded from their supporting parts in TOS, and our three remaining crewmembers are new characters. Gruff security chief La’an (Christina Chong), snarky alien engineer Hemmer (Bruce Horak), and quippy helmswoman Erica Ortegas (Melissa Navia), who has a relatively small role so far, but follows an important cue from Discovery: A funny lesbian is a vital addition to any Starfleet crew.

All this is to say that Strange New Worlds is rooted in Star Trek’s past, and as with Discovery, some fans may be frustrated by its static place in the timeline. At first, this is a little distracting. How can they do anything interesting with Spock, when his most important character development occurs years in the future? Is it just cheap nostalgia to revive someone like Nurse Chapel, instead of venturing into new territory? But after a few episodes, these concerns melted away.

You may, if you wish, simply choose to believe this all takes place in an alternate timeline. Pike’s personal angst is an explicit commentary on this idea: He literally knows his own future, struggling with a sense of inevitable doom. In a broader sense, the show also embraces a flexible attitude to canon characterization. Nurse Chapel is unrecognizable compared to her rather dated role in TOS. Some background characters (ie. transporter tech Kyle) have different ethnicities than before. And while Ethan Peck has an impressive grasp of Leonard Nimoy’s mannerisms and vocal intonation, his performance doesn’t feel like the stiff, severe character we might imagine from Spock’s pre-Kirk era.

This Spock is youthful; still benefiting from Pike’s mentorship, and surprisingly open to making friends among the crew. His fiancee T’Pring has a very different role from her depiction of TOS—an intriguing choice, because they retain T’Pring’s bitchy and aloof personality (good!), while switching her role from antagonist to genuine love-interest.

Celia Rose Gooding is extraordinarily charming as Uhura—a gift of a role, because while Uhura is a beloved figure, she didn’t get much solo screentime the 1960s. Already a Tony nominee and a Grammy winner at 22 (helpful since Uhura is a singer!), Gooding’s talent echoes Uhura’s current role as a high-achieving newbie. She’s an immediate standout in a crowded field of fun, likable performances, and I predict this version of Uhura will be particularly popular with younger viewers.

Despite a few stumbles and overly-clichéd ideas here and there, Strange New Worlds already feels like a successful blend of vintage and modern Trek. The cast is more diverse and the characterization is more quickly established than we saw in earlier eras of TV, with deeper continuity between episodes. However the overall format is close to what we saw in the ‘90s, with A-plot/B-plot adventures that conclude in one sitting.

In the same way that many vintage eps took place on cardboard sets, Strange New Worlds often relies on glossily blatant greenscreen. But what of it? The important thing is the writing, which already displays a welcome affinity for inspiring speeches, affectionate humor (“It appears that hijinks are the most logical course of action,” remarks Spock), and elaborate Starfleet problem-solving.

Early episodes range from a submarine thriller to an ensemble comedy involving four equally-silly subplots. You’ll soon stop caring about the show’s place in the canon timeline, because unlike Picard and Discovery, none of this is high-stakes “save the universe” stuff. It’s fun, character-focused adventures. Old-school, but without being overly precious or conservative about what came before.