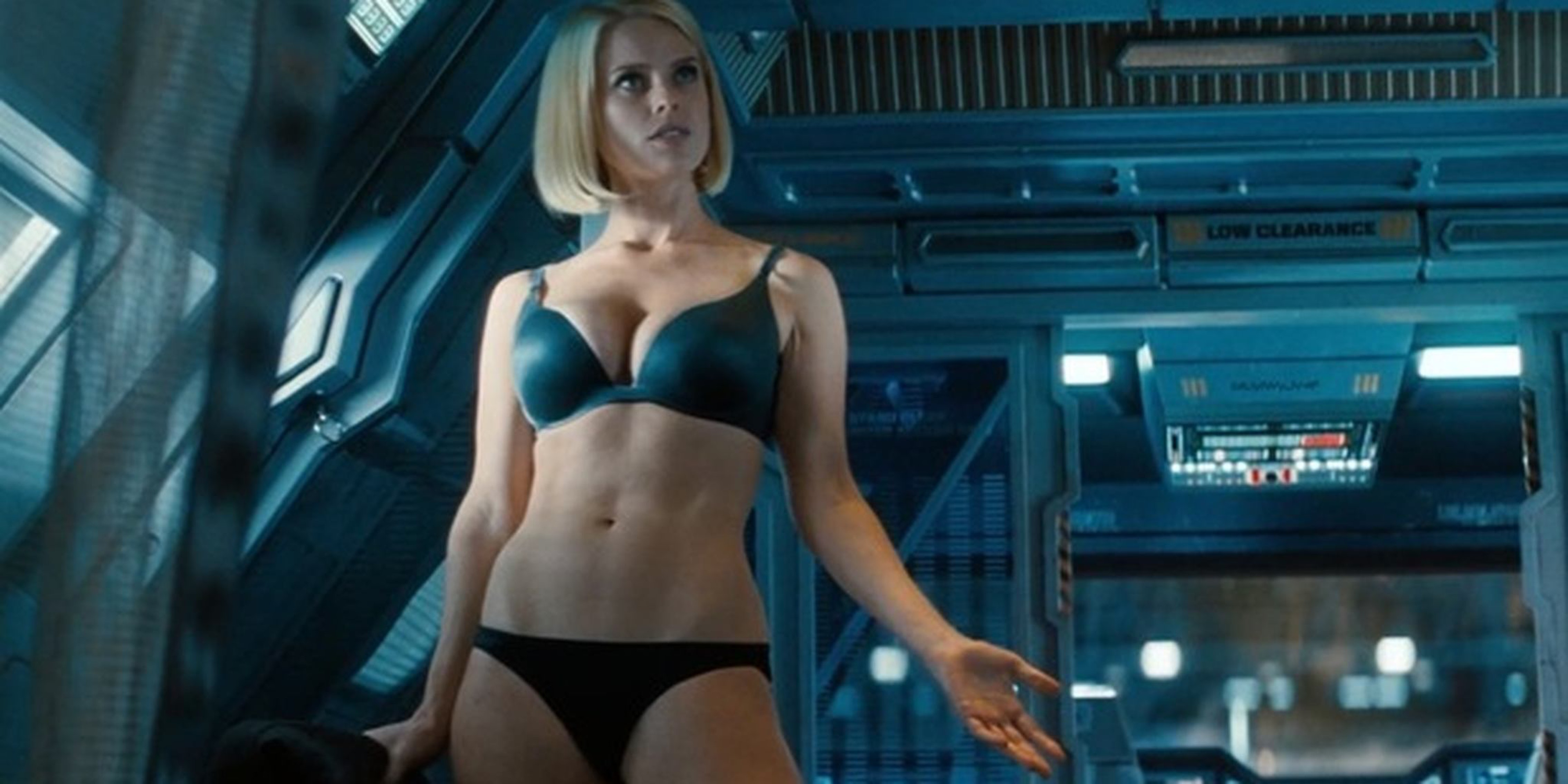 “Star Trek Into Darkness”: Too many d*cks on the Enterprise

With the new Star Trek movie, JJ Abrams has gone from trying to trying to appeal to new audiences to forsaking core fans altogether.

In 2009’s Star Trek, JJ Abrams successfully made the effort to appeal to new viewers as well as dyed-in-the-wool Trekkies. This time round, he seems to be going further afield— and alienating the original fanbase entirely.

The publicity for Into Darkness has been solidly high school: Don’t worry—it may be Star Trek, but it’s not for nerds anymore! In an interview with Jon Stewart this week, Abrams made it very clear that he’d never liked the show as a kid, because it was “too philosophical.” “I stopped listening when you said you didn’t like Star Trek,” Stewart joked. “I saw your mouth moving, so I assume you apologized.”

It’s not actually necessary for a director to be a lifelong fan if they want to make a successful adaptation. In fact, JJ Abrams’ first Star Trek movie was proof of that. But it’s another thing for an adaption to leave most of the original show’s values in the dust, which is what Into Darkness seems to be doing. The dialogue is snappy, the action sequences are fun, and the characters seem real enough, but the heart and the brain are now gone.

In 1966, Star Trek broke new ground with its international crew of hopeful explorers, scientists, and adventurers. True, the show was full of heavy-handed Cold War metaphors and casual 1960s misogyny, but its central messages were obvious: Racism is bad. Give peace a chance. That kind of thing. Men and women, Russians and Americans, aliens and humans: all could work together on a more-or-less equal footing. For many viewers, Nichelle Nichols (Lieutenant Uhura) was the first woman of color they’d seen playing anything other than a maid. Star Trek was pushing the envelope.

In 2013, not so much. Into Darkness shows more racial diversity among cameos from alien species than it does among human characters in main speaking roles. Worse still, iconic Star Trek villain Khan Noonien Singh was recast as Benedict Cumberbatch, possibly the whitest man on the planet.

In Khan’s original role, he was super-intelligent, super-strong, the head of a genetically engineered master race—and brown. In other words, the opposite of the usual racial stereotypes one saw in mid-20th century “foreign” or “exotic” villains. Whitewashing Khan into being an posh-sounding Englishman reinforces the message sent out by Kirk, Spock, and the morally ambiguous Admiral Marcus: Good or evil, everyone in power is a white male. Suddenly, the awkwardness surrounding one of John Cho’s publicity interviews makes sense. “Who is your favourite villain?” he is asked. “Ricardo Montalban,” he answers. “He was badass. And a man of color, I might add.” Nervous laughter. Next question, please.

Representation matters. Star Trek is proof of that. Kirk and Uhura famously shared US TV’s first interracial kiss, and Uhura went on to inspire the first black female astronaut to go into space. When Nichelle Nichols was thinking of quitting the show, Martin Luther King, Jr. felt that her position as a role model was so important that he personally asked her to reconsider staying on.

The representation of women in Into Darkness has, if anything, gotten worse. Over the years, various Star Trek movies have attempted to redress the gender imbalance in the original crew of the Enterprise. With one woman and six men in the core cast, it’s already kind of a sausage-fest. This movie adds Carol Marcus, played by Alice Eve, but although her role is that of a scientist and a Starfleet officer, she isn’t exactly treated with respect. Not only does she have a completely gratuitous semi-nude scene halfway through the movie, but McCoy hits on her while she’s trying to defuse a bomb. Oh, and her most important role in the movie is governed by her relationship with a male character—her father.

It isn’t as if fans don’t notice little details like this. While 2009’s Star Trek was massively popular, particularly among female-led online fandom, people were still making fanvideos like “…on the dancefloor”. In just over a minute, this video says more about female representation in blockbuster filmmaking than some gender studies textbooks—all while maintaining an enthusiastic and affectionate attitude towards Star Trek itself.

Too many dicks on the dancefloor, indeed. Over 65,000 people have watched that video, and chances are they won’t be too impressed by the bro/ho ratio in Star Trek Into Darkness, either.

The problem here is that while Star Trek has a rather large male fan base, it also has a rather large female fan base. In fact, if you did a Trekkie census, I wouldn’t be surprised if the gender divide came up to around 50/50 (much more than you can say for the content of the actual movies). Women have been instrumental in Star Trek fandom for decades, with female fan Bjo Trimble setting up the “Save Star Trek” campaign that got the show renewed for an extra season back in the ‘60s. Now, women dominate Star Trek’s enormous online fandom, posting constantly on Tumblr and fanfiction sites, and appearing in droves at conventions.

I actually understand a lack of interest in adding women to the core crew of the Enterprise. Those roles are already filled: by Kirk, Spock, Bones, and the rest. But when it comes to side characters and antagonists, almost every single one is male, for no discernable reason. At one point, we see one of the main villains in the captain’s chair of a ship that seems to be crewed entirely by men. Earlier, Kirk, Spock and Uhura are confronted by a platoon of Klingons—all apparently male as well. Are we expected to believe that a mysterious plague has wiped out 75% of the women in the galaxy? Throw me a bone, here.

Then again, the filmmakers are completely upfront about all this. In an interview with the Guardian, costume designer Michael Kaplan explained away Alice Eve’s random and unnecessary underwear scene:

“Last time, Zoe needed to wear underwear, and this time it was Alice Eve’s turn. You know, it’s a rather large male fanbase, and JJ wanted to appeal to that.”

Yes, Zoe Saldana needed to have an underwear scene.

What JJ Abrams doesn’t seem to understand is that Star Trek’s fans, regardless of gender, aren’t sticking around because they want to see Zoe Saldana in her underwear. They’re sticking around because they like Star Trek. Instead of taking a leaf out of Michael Bay’s book and trying to appeal to horny teenage boys (who would probably be watching the movie regardless), it might be a better idea to take inspiration from… Star Trek. You know, that TV show from the 1960s that attempted to imagine a future free from Mad Men stereotypes, and that rapidly gained a fan following even more diverse than the various races and species it showed on screen.

The message Into Darkness sends is that if you’re an old-school Star Trek fan (and particularly if you’re a woman), JJ Abrams doesn’t think you’re worth appealing to. The audience brought in by Alice Eve’s push-up bra is more important than the audience who spend hours online discussing the geeky details of the series, or attend the conventions that pay for William Shatner’s retirement fund.