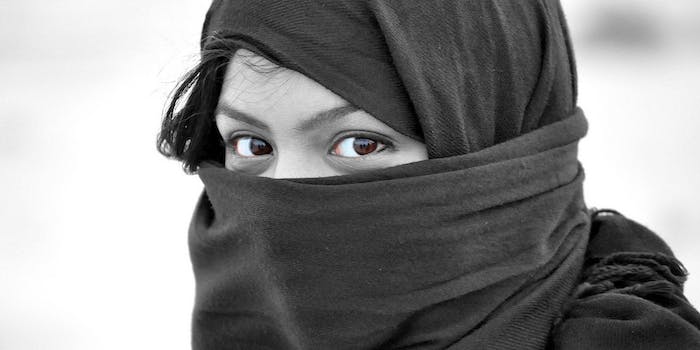 After the Paris attacks, it’s time to #StandWithMuslims

It's time to stop waging war against innocent bystanders.

The horrific violence that took place Friday night in Paris was like something out of a horror movie. In a series of coordinated attacks, Muslim terrorists armed with bombs and AK-47s killed 128 people in the French capital. According to the Telegraph, the Bataclan attackers “slaughtered at random, shooting from windows and doors at people trying to escape.” An officer on the scene compared the assault to Dante’s Inferno.

In the wake of the Paris attacks, social media users have urged with world to #PrayForParis, while Muslims started the #NotInMyName hashtag to condemn fundamentalist violence and show solidarity for the City of Light. That support is important to victims and survivors of this tragedy—as well as their grieving families—but it’s our own responsibility to #StandWithMuslims during this fraught moment.

After terrorist attacks take place, the people who pay for it are rarely those who perpetrated the violence, but rather innocents who just happen to look like those who did: the Muslim student walking home from school or the cabbie just trying to make a living. That’s exactly what has already happened following the Paris incident: An Uber driver in Charlotte, North Carolina, was attacked by a passenger who threatened to kill him for being Muslim. The driver, Samson Woldemichael, isn’t Muslim; he’s a dark-skinned Ethiopian immigrant who came to the U.S. eight years ago. He’s also a Christian.

That’s just one of a wave of Islamophobic incidents since Friday night. A mosque outside of Ontario, Canada was allegedly burned in an arson attack, while a Muslim family in Florida reported bullets fired into their garage. In Britain, a salon owner posted to her Facebook that she would banning all Muslims from her establishment. Elsewhere on the social networks, posts like the one below went viral: 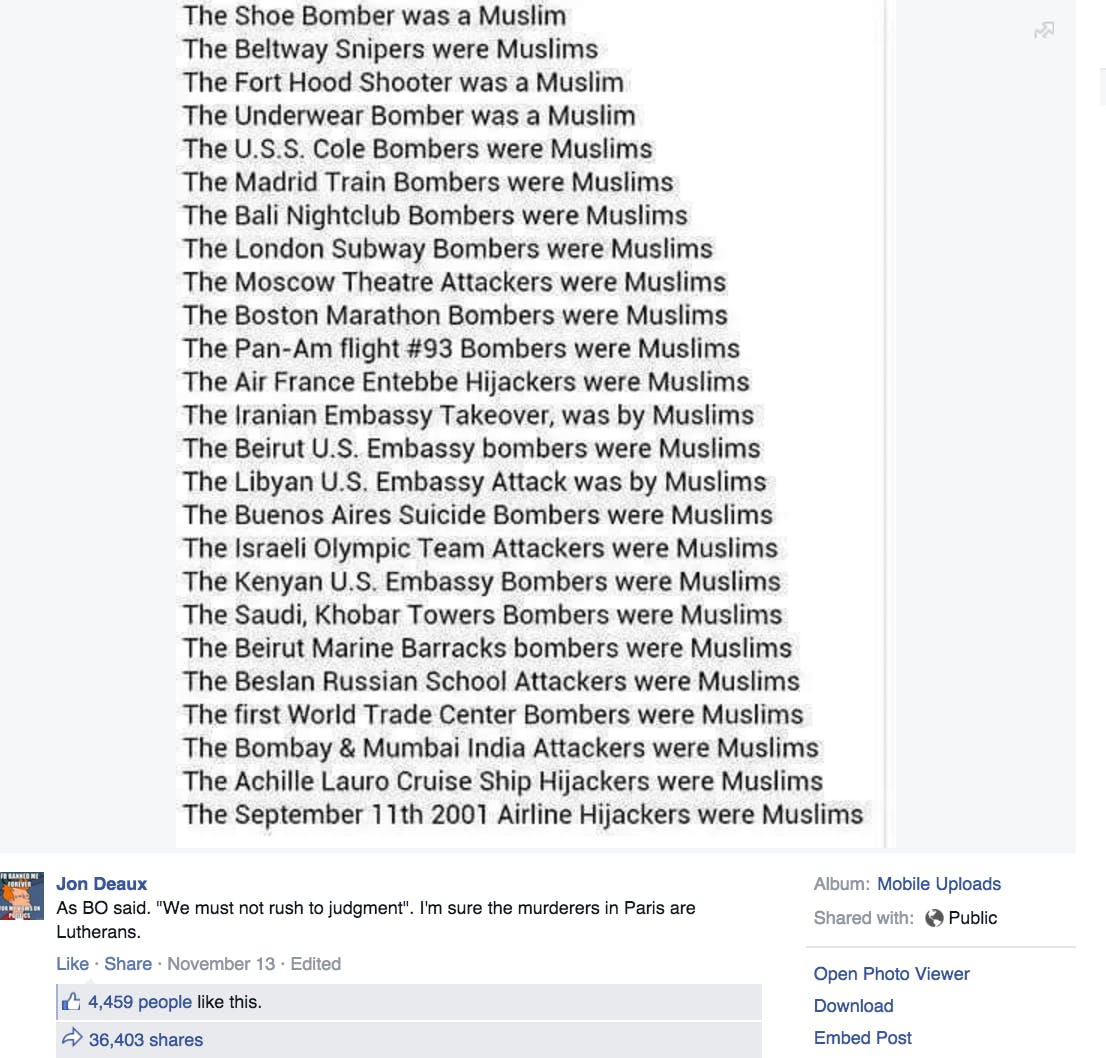 In the past few years, people of the Islamic faith have unfortunately learned to expect this—as anti-Muslim hate crimes have become a terrifying norm. The 48 hours following the Charlie Hebdo attack saw “16 places of worship around France… attacked by firebombs, gunshots or pig heads—a major insult to Muslims who don’t eat pork,” according to the New York Daily News. Within a week, the number of attacks would escalate to 50. In the U.S., the Chapel Hill shooting this past February sparked an anti-Muslim crime wave across the country.

But as Georgetown’s Bridge Initiative team reports, Chapel Hill wasn’t the beginning of America’s recent Islamophobia problem: Hate crimes against Muslims have spiked by 50 percent in the U.S. since 2010, when developers announced the planned construction of Park51, an Islamic community center in Lower Manhattan. Pejoratively referred to as the “Ground Zero Mosque,” it would have been located two blocks away from the World Trade Center—a fact that sparked huge controversy among right-wing critics. Well-known anti-Muslim crusader Pamela Geller, best-known for hosting the “Draw Muhammad” contest in Garland, Texas, called it the “second-wave of the 9/11 attack.”

Hate crimes against Muslims have spiked by 50 percent in the U.S. since 2010.

All in all, Muslims are five times more likely today to be the victim of a hate crime than they were before 9/11. That’s not a trend that makes the world any safer. Threatening to strangle your cab driver or telling your Facebook friends that you’re not going to serve Muslims anymore does absolutely nothing to stop future attacks. Arguably, our hate crime wave is the perfect ISIS recruitment video.

It’s time to stop waging war against the people who have absolutely nothing to do with the attacks on Paris, Charlie Hebdo, or anywhere else. By failing to make the distinction between Islamic fundamentalists and mainline believers, we’re doing an extreme injustice to 1.57 billion people on the planet—99.99 percent of whom stand with us in horror at last Friday’s events. This is why it’s so disheartening to hear that a number of states will refuse to allow Syrian refugees into the country.

In a statement released in the wake of the attacks, Afghan president Ashraf Ghani offered an important reminder that closing our borders and thumbing our noses won’t solve the problem—because Muslims aren’t the enemy. “Afghan people have for many years been the victims of terrorist attacks,” Ghani said. “They feel the pain of Parisians, and share the grief of the victims’ families. … Terrorism is a serious threat to the entire world and we are united in the struggle.” In doing so, he pledged his country’s support in fostering a multistate response to the scourge of violent extremism.

Instead of focusing on the religious differences that drive us apart, we need to highlight the crucial things we have in common and the ways in which we can come together for understanding. Otherwise we’re going to keep doing ISIS members’ work for them.