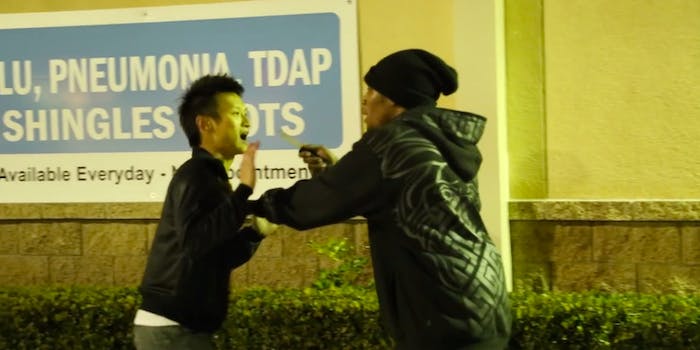 Just when you thought YouTube pranksters couldn’t push the envelope any further.

Just when you thought YouTube pranksters couldn’t push the envelope any further.

In the past couple years, we’ve already seen a zombie apocalypse, a chainsaw-wielding slasher straight out of a horror movie, and a fake suicide by hanging. (Not to mention the YouTube “pick-up” pranks aimed at women, some of which toe the line of sexual harassment) But this latest prank from fairly new performer Josh Paler Lin may have finally gone too far.

In the past few weeks, he’s already had to deal with the cops and seems more focused on causing panic among passersby than making people laugh by choking on food and pulling out a gun in public, but that’s nothing compared to pretending to attack someone with a knife in public.

This tasteless array of shock value plays out much like the video title suggests. After an argument with a stranger looking for money, Lin gets “stabbed” in the gut.

The crowd reaction varies as some ignore Lin, others try to help him, and one guy chases down the stranger until Lin is forced to reveal it’s fake. Understandably, that man doesn’t take it well.

Almost always, someone shouts out to call 911—and once the police get involved, they aren’t laughing.

“Do you think that’s funny? Killing, like, stabbing you?” one asked, clearly angry.

He plans to pull off even more outrageous pranks, but we have a word of advice. If it could possibly waste the time of local authorities, you probably shouldn’t do it.