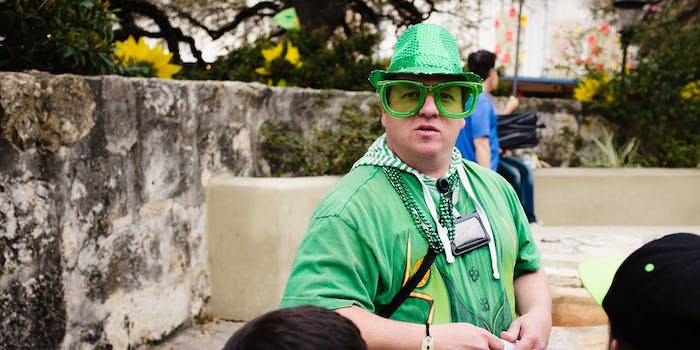 Photo via Jesse Acosta/Flickr (CC BY 2.0)

Why I hate St. Patrick’s Day

I’d like to think that you don’t choose the holiday you hate most: It chooses you. For most people on the Internet, the haterade is perennially reserved for Valentine’s Day, the least-loved of all American holidays. February 14 is a maligned greeting card holiday and a paean to corporate-sponsored excess, when every kiss begins with Kay and Jared is the other man in your relationship.

But while Valentines’ Day makes a good Internet piñata, the ultimate low-hanging fruit, the former pagan holiday can’t touch St. Patrick’s Day in its utter egregiousness, the yearly ode to liver failure and getting drunk in the street at 10am. St. Patrick’s Day, which offers a secular celebration of Irish culture for those who trace their ancestry back to Ireland, wouldn’t be a bad idea if the modern version weren’t so crassly synthetic. In the 20th century, Time’s Mike Cronin explains that it became a “marketing bonanza,” as “greetings cards filled drugstores, imported Irish shamrocks (indeed anything green) showed up on T-shirts, and the food and drink that became associated with the day became bar promotions.”

St. Patrick’s Day wouldn’t be a bad idea if the modern version weren’t so crassly synthetic.

However, Cronin explains that St. Patrick’s Day wasn’t always this way. The observance originally celebrates the spread of Christianity to Ireland, brought to the region by the holiday’s titular saint. While this speaks of religious origins, St. Patrick’s Day developed as a celebration of the diasporic Irish community in America at a time that was notoriously unfriendly to foreigners—especially the Irish. Stereotyped by anti-Irish nativists as “drunken, violent, criminalized, and diseased,” St. Patrick’s Day was the original pride festival and a symbol of resistance; as Cronin argues, the holiday “announced that Irish-Americans were numerous and powerful, and not going anywhere.”

“Through the use of symbols and speeches, Irish-Americans celebrated their Catholicism and patron saint and praised the spirit of Irish nationalism in the old country, but they also stressed their patriotic belief in their new home,” Cronin explains. “In essence, St. Patrick’s Day was a public declaration of a hybrid identity—a belief in the future of Ireland as a nation free from British rule, and a strict adherence to the values and liberties that the U.S. offered them.”

That version of St. Patrick’s Day is not only radical but profoundly American, espousing a belief in a post-national ideal, where people of a diversity of nationalities can celebrate their heritage in order to overcome the sins of our ancestors. Although we might come from places of war and famine, St. Patrick’s Day is ideally about the promise of a better future in a new home. Cronin writes, “It’s the closest thing in America to National Immigrant Day, a tribute not only to the Irish, but to the idea that Americans are all part ‘other.’” This celebration of a hyphenated identity is why the holiday caught on in America in a way that it didn’t in Ireland until the 20th century, where it was traditionally celebrated as a somber religious festival.

That’s a nice ideal, but the actual reality of St. Patrick’s Day is more like what Jezebel’s Erin Gloria Ryan outlines in a 2011 takedown of the holiday: an excuse for “getting drunk for 12 hours straight in March to feel like [you’re] not alone.” The holiday has become less a way to fight Irish stereotypes than to reinforce them: What other cultures do we “celebrate” simply by acting like an overgrown frat boy all day? St. Patrick’s Day might have been cute in college, when wearing a “Kiss Me I’m Irish” t-shirt passed as cool after your third pint, but as an adult, pinching everyone in sight starts just become irritating. Eventually, you just become the drunk guy at the party who won’t leave.

In a post for Cracked, Irish writer Luke McKinney puts it in perspective. “The Irish don’t celebrate Independence Day by guzzling hamburgers until we throw up over crates of machine guns,” McKinney writes. “Every St. Patrick’s Day, drunken North Americans stagger up to tell me their great-grandmother was Irish, and I say great, if she turns up I’ll buy her a pint.”

Eventually, you just become the drunk guy at the party who won’t leave.

It’s precisely this association with overconsumption, primarily of the alcoholic variety, that’s eclipsed all other meanings of St. Patrick’s Day, which ranks number two on BroBible’s top drinking holidays. That’s fine if you’re working on your audition for the inevitable Hollywood reboot of Leaving Las Vegas (it’s coming), but it has about as much to do with Ireland as your coworker’s Cinco de Mayo sombrero has to do with commemorating the Mexican army’s victory over the French at the Day of the Battle of Puebla. In 2015, St. Patrick’s Day celebrations are a lot like dyeing the Chicago river green: toxic and ephemeral, fading by the following day. But unlike the formula that temporarily turns the black river to emerald, the trash that lines the streets after the parades march by doesn’t go away.

The biggest problem with America’s St. Patrick’s Day is that it actually reinforces all the tired cliches the diasporic Irish worked to fight. Vice’s Emelyn Rude describes the holiday as a “violent, drunken disaster,” with arrests and outbreaks of violence in cities like Champaign, Ill., and Hoboken, N.J. Hailed as the “douchiest city to celebrate St. Patrick’s Day,” Rude explains that Hoboken serves as “the epicenter of St. Patrick’s mayhem.” Rude writes, “In 2011 … 34 people were arrested, and 136 were transported via ambulance. Police reports cited citizens holding up various residents of an apartment building at knifepoint, attempting to steal bottles of Grey Goose from a bar, and being beaten to a pulp by ‘men wearing green T-shirts and jeans.’”

If this picture described Ferguson, Mo., we would call in the National Guard, not give out Hallmark cards to celebrate it. There’s nothing wrong with being proud of where you’re from or saluting your heritage, but a holiday increasingly devoted to property damage, socially acceptable rioting, and drunk driving isn’t doing anyone any favors, let alone the people it’s supposed to honor. I might hate St. Patrick’s Day, but I don’t hate it nearly as much as St. Patrick would.

Photo via Jesse Acosta/Flickr (CC BY 2.0)