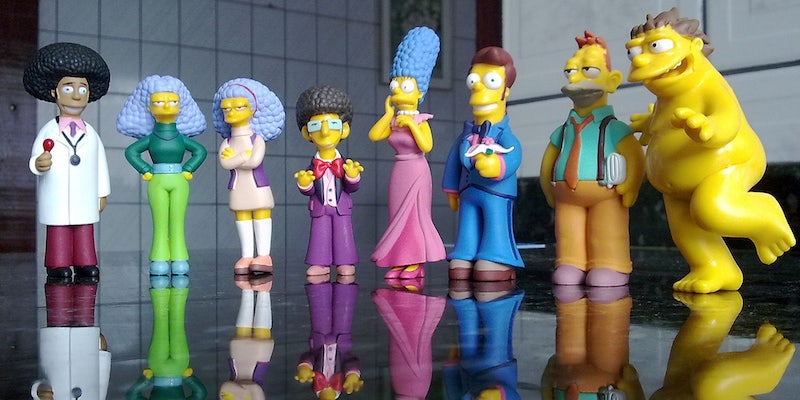 The perverse, unique fears we attach to childhood entertainment are having a moment.

In Squidward’s Suicide, a Nickelodeon intern finds a discarded, cursed SpongeBob Squarepants episode spliced with images of child mutilation. It ends with everyone’s favorite cantankerous squid putting a shotgun in his mouth and pulling a trigger.

The screen slowly begins to zoom in on his face. By slow I mean it’s only noticeable if you look at shots 10 seconds apart side by side. His sobbing gets louder, more full of hurt and anger. The screen then twitches a bit, as if it twists in on itself, for a split second then back to normal. The wind-through-the-trees sound gets slowly louder and more severe, as if a storm is brewing somewhere. The eerie part is this sound, and Squidward’s sobbing, sounded real, as if the sound wasn’t coming from the speakers but as if the speakers were holes the sound was coming through from the other side. As good as sound as the studio likes to have, they don’t purchase the equipment to be that good to produce sound of that quality.

In Pokémon Black, a kid picks up a bootleg version copy of Pokémon Red for the Gameboy. He starts a new game, and finds he has a Pokémon named “Ghost” in his party. It has one move, “curse,” which allowed him to destroy other trainers and other Pokémon. Eventually Ghost grows powerful enough to challenge the player for his soul. He loses, and the game ends.

The implication was that the Pokémon died.

In Dead Bart, an unknown scribe tells us the story of a lost episode of The Simpsons, dating back to season one. He tracks down Matt Groening and asks his help in finding it. Groening panics, begs him not to mention it again, and scribbles down a website. It’s there he finds “Dead Bart,” downloads the episode, and watches in horror.

Act one ended with the shot of Bart’s corpse. When act two started, Homer, Marge, and Lisa were sitting at their table, crying. The crying went on and on, it got more pained, and sounded more realistic, better acting than you would think possible. The animation started to decay even more as they cried, and you could hear murmuring in the background. The characters could barely be made out, they were stretching and blurring, they looked like deformed shadows with random bright colors thrown on them.

There were faces looking in the window, flashing in and out so you were never sure what they looked like.

This crying went on for all of act two.

Act three opened with a title card saying one year had passed. Homer, Marge, and Lisa were skeletally thin, and still sitting at the table. There was no sign of Maggie or the pets.

They decided to visit Bart’s grave. Springfield was completely deserted, and as they walked to the cemetery the houses became more and more decrepit. They all looked abandoned. When they got to the grave, Bart’s body was just lying in front of his tombstone, looking just like it did at the end of act one.

None of these are real. They’re ghost stories written on the Internet to keep other forum dwellers up at night. But Dead Bart, Pokémon Black, and Squidward’s Suicide are representative of a growing school of Internet fiction that focuses on the perverse, unique fears we can attach to our childhood entertainment.

These stories have proved to be incredibly popular. They get incessantly re-posted on amateur horror-fiction hubs like 4chan and Reddit, there have been interpretive fan videos uploaded to YouTube, like this one for Squidward’s Suicide or this one for Dead Bart, designed specifically to maintain the suspension of disbelief.

There are entire subcategories on the Creepypasta wiki (the tongue-and-cheek term for this type of Internet-based short story) dedicated to tales about haunted video games or phantasmal television episodes. Horror fiction inspired by non-horror fiction is in the midst of a renaissance.

It makes more sense than you might think. The most potent fears are rooted in childhood vulnerability, and I can recall several moments of unintentional terror rooted in the grotesque, hyper-realistic art styles that SpongeBob Squarepants would occasionally employ. That the Pokémon Black story focuses on Lavender Town—a city in the game known for its gravestones and unsettling—makes a perfect foil for the sensitive 8-year-olds of the world. Personally, the most authentic scares I remember come from a time in my life when fiction was at its realest:
Elementary school, caught in delirious worlds, no buffer or honed self-protection.

I remember the debilitating dread of the moon from Majora’s Mask, and resetting the timetable whenever I got antsy. I remember putting in the Pokémon Snap cartridge incorrectly, accidentally summoning a glitched, demonic Pikachu voice deep from the sound card. I remember the anxiety of a very PG, and very playful Kenan & Kel made-for-TV horror-comedy that gave me nightmares for weeks.

Horror works fine, but there’s something to be said for the terrors that come from fiction that doesn’t intend to be malevolent. That’s what’s most affecting about these stories. They make us remember a time when we didn’t know the rules, and everything—literally everything—is out to get you.

It turns out the unfair, soul-crushing panic when SpongeBob shows you something weird, or when Pokémon makes you walk through a graveyard, doesn’t go away.