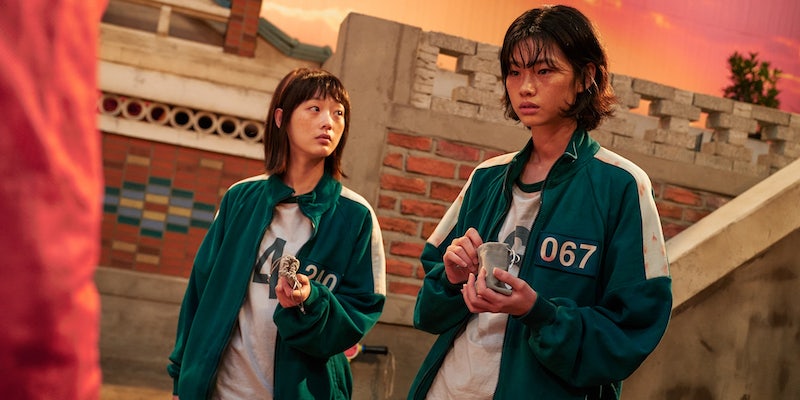 This episode was a pitch-perfect character study, highlighting the sadistic genius of the show.

Episode 6 of Squid Game, “Gganbu,” is where the proverbial shoe finally drops. By this point we’re heavily invested in several characters, and we know we’re destined for heartbreak. The last couple of episodes saw the contestants split into teams, both literally (to win a tug-of-war) and emotionally, as the characters let down their guards and began to bond. But we understand those relationships can’t last. Only one person can come out on top.

Echoing numerous dystopian fight-for-your-life thrillers including Battle Royale and The Hunger Games, Squid Game isn’t an especially original concept. Its brilliance lies in its execution, balancing nail-biting dread with well-observed characterization. The first five episodes delve into the fears, ambitions, and moral outlooks of the main contestants, before “Gganbu” pushes them all to breaking point. After learning to trust and support each other, they’re told to pair up into teams of two. But instead of collaborating, these pairs are ordered to compete. Each duo will play a simple game of marbles, and the losers get shot in the head.

There’s a palpable sense of horror as we realize the implications for our three main pairs: Protagonist Seong Gi-hun (456) and his elderly friend Oh Il-nam (001), disgraced businessman Cho Sang-woo (218) and likable Pakistani immigrant Ali Abdul (199), and North Korean defector Kang Sae-byeok (067) opposite her new friend Ji-yeong (240). We can guess which of these characters will survive, but as always, Squid Game‘s predictable moments are among its most compelling. If we know that Seong Gi-hun will have to kill a vulnerable old man, this knowledge just ramps up the pain and tension.

Back home, Seong Gi-hun is an absent father and a neglectful son. He gambles irresponsibly and ignores his mother’s illness, only facing up to reality after she’s hospitalized. Neither smart nor decisive, he’s one of the weaker competitors. But while other characters embrace their dark side when push comes to shove, Gi-hun shows compassion and tries to make friends. His most important relationship is with Oh Il-nam, an old man with a brain tumor. Vulnerable and suffering from dementia, Il-nam inspires Gi-hun’s protective instincts—and in turn, Il-nam’s wisdom saves their team’s lives during the tug-of-war. It’s a sweet friendship in the midst of a disturbing scenario.

The episode title “Gganbu” (childhood BFFs) comes from a conversation between these two men, sharing nostalgic memories of playing marbles in the street. The show’s production design plays a major role once again, switching things up after the garish surreality of the first three challenges. This time the game designers have built a replica of a working-class Korean neighborhood, lit with a warm twilight glow. It’s the perfect setting for a challenge that’s more emotional than violent.

Of course, Il-nam and Gi-hun soon learn that this can’t be a friendly game. The loser has to die. This takes on a deeper meaning in later episodes, but even now it’s deeply upsetting. Especially when Gi-hun realizes he can easily win by taking advantage of Il-nam’s dementia. After trying and failing to win a fair game, Gi-hun begins to exploit Il-nam’s failing memory.

The final twist is that Il-nam actually knows what’s happening. Not only does Gi-hun sacrifice his friend, but he must admit his guilt face-to-face. Il-nam will die knowing that Gi-hun has betrayed him, and Gi-hun has to live with that. A perfect example of the game’s sadistic design.

Through each round of the contest, Squid Game intensifies its allegorical depiction of capitalism. First, the contestants must survive the rat race of “red light, green light.” Then comes the dalgona candy, a game of chance and skill. The tug-of-war is the first contest where people must actively kill their opponents instead of allowing them to passively die. However it still doesn’t feel like murder, partly because it’s a form of physical combat, and partly because they’re working as a team. But in “Gganbu,” the contestants must look someone in the eye and choose to kill them in intimate conditions. The games have slowly led them to this point; a parallel to the moral compromises required to become super-rich.

Among the main cast of “good” characters, investment banker Cho Sang-woo is the most morally ambiguous. While not a malevolent figure like the gangster Jang Deok-su (101), he can be ruthless and calculating. After giving Seong Gi-hun (his childhood friend) helpful advice in the first game, he withholds information in game #2; a decision that easily could’ve led to Gi-hun’s death. There’s also an ominous undertone to his relationship with Ali. Sang-woo makes friendly overtures, but you get the sense that he sees Ali as a useful pawn, manipulating Ali’s trusting nature.

Ali is one of the nicest competitors; a naive and friendly man with a deferential attitude toward people like Sang-woo, who he perceives as being above him on the food chain. In episode 2, Sang-woo unintentionally gains Ali’s loyalty by giving him money for the bus; a good turn that makes Sang-woo look more charitable than he actually is. The bus money means little to Sang-woo, who is temporarily cash-rich but is facing arrest for white-collar crime. But once they return to the games, Sang-woo knows he can rely on Ali’s loyalty. As one of the more strategic-minded competitors, Sang-woo is likely aware that his “partner” may really be his opponent in episode 6. He quickly accepts that he’ll have to kill Ali.

Sang-woo ultimately wins by trickery, stealing Ali’s marbles and replacing them with pebbles. So while he’s not happy to kill Ali, he’s comfortable with winning through outright betrayal. There’s also an allegorical element to this pairing. Sang-woo is a white-collar criminal while Ali is an immigrant laborer living in poverty. Both inside and outside the game, Sang-woo profits from other people’s work and suffering. And instead of facing Ali on equal footing, Sang-woo chooses to trick him.

Sang-woo ends the game with an appeal to authority, showing his stolen marbles to an armed guard and explaining that he technically “won” them. He explicitly wants the guard to shoot Ali and get it over with, making it abundantly clear that he’ll do anything to win.

Squid Game is relatively light on female characters, while also being aware of sexism as a motivating bias. In episode 4, gangster Jang Deok-su recruits an all-male team because he prioritizes physical strength; a choice that’s fueled by misogyny, but is ultimately proven right because the contest is a tug-of-war. Meanwhile, Cho Sang-woo’s sexism is couched in more “reasonable” terms, making a quasi-scientific argument for male superiority. This leads to a darkly funny scene satirizing Sang-woo’s corporate background. When he asks a man to join his team, the man explains that he wants to bring his wife. Sang-woo replies, “We already have many women on our team.” In reality, he’s aiming to recruit as few women as possible. His explanation echoes the deceptive hiring process for a tacitly sexist workplace.

Of course, Sang-woo doesn’t get his wish. In episode 4, his team ends up with three women including Ji-yeong, who Kang Sae-byeok recruits because she sees her as a kindred spirit. They’re both young women, and they’re both loners. We soon learn that they share a kind of laconic cynicism, and in episode 6, they’re the most cooperative partnership.

While the other pairs argue or try to deceive each other, Ji-yeong and Kang Sae-byeok agree to play one simple game at the end of their allotted time. They spend the rest of their time having a heart-to-heart, sharing their backstories (Ji-yeong just got out of jail; Kang Sae-byeok lost most of her family while fleeing North Korea) and forming a closer bond. In the end, Ji-yeong chooses to sacrifice herself because Sae-byeok has more reason to live for.

Anchored by heartfelt performances from actresses Jung Ho-yeon and Lee Yoo-mi, we get a real sense of how young and traumatized these two women are. Both are tormented by circumstances beyond their control, to the point where Ji-yeong’s final decision comes across as both noble and nihilistic.

It’s a heartbreaking scene, not least because this was Sae-byeok’s first chance at a true friendship. Arguably their relationship highlights the camaraderie between young women compared to the vicious competition between the male/male pairs. But really it’s down to the specific dynamic between these two characters. You get the impression that they really would’ve been friends if they’d both escaped the game. No wonder Sae-byeok and Ji-yeong are the breakout romantic pairing among fans of the show, inspiring tons of fan art. We want them to get their impossible happy ending.