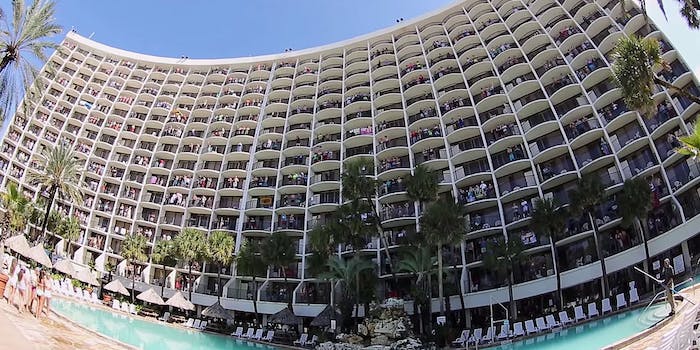 And the hotel guests freaking love it.

Proprietors of the Holiday Inn in Panama City, Fla., know that the only thing spring breakers like more than body shots is a healthy dose of nostalgia. That’s why each morning during the March busy season, they play “The Circle of Life” from The Lion King to wake college coeds out of their epic hangovers.

This tradition has flourished since 2012. “It was a song that worked real well as a wake-up call because of the loud beat in it, and it also works real well because of the message of the song. It fits with the kids and the mood and what they’re going through right now,” Holiday Inn Marketing Director Philip Corvin told local news station WHJG.

Instead of being annoyed that some stupid grown-ups are keeping them from a second hookup with the stranger in their bed from the night before, the college kids seem to love the 11am call-to-arms. They flock to their balconies to greet the day with gusto and think about the drugs they’re about to consume. It’s Americana at its finest.

“I think it’s awesome I cried the first day because I was so happy I thought it was so cool,” spring breaker Mary Waller told WHJG.

Fellow guest Jessica Young echoed her sentiment. “It’s the best thing ever. Every morning when we wake up we look forward to it it’s like an entire Panama City Beach Holiday Inn family just singing together.”

Is this spring break or a cult induction? Weirder things have happened in Florida.