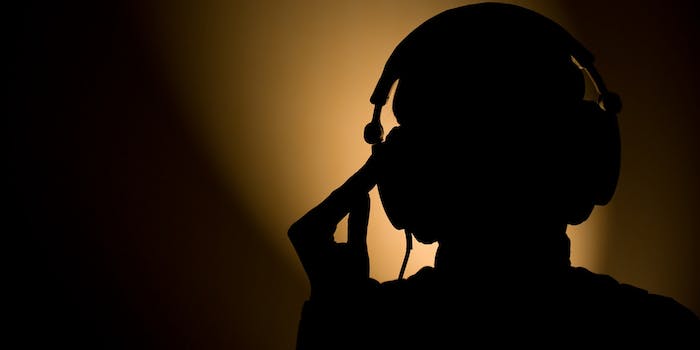 Ten tracks of nothingness sounds a lot like your favorite band's future.

It is a maxim of the new breed of Internet culture that, if something is as easily obtained illegally as it is legally, most will vouch for the legal option. Streaming music or movies from respectable companies like Netflix and Spotify, as opposed to torrenting them from shady P2P hubs, is not only safer, but it fills us with the contented guiltless behavior of giving back to the artists we love.

Spotify, however, has come under scrutiny for devising a system where artists are drastically underpaid, to the point they earn fractions of a cent for every listen. Although the music-streaming service paid out $500 million last year in royalties to artists and record labels, the average rights holder on Spotify earned a meager sixth to an eighth of a cent per listen. Take note that is not what the artist earns; their fraction is significantly smaller after labels and distributors take their cut (which is individualized in the artist’s contract) and is reduced even further after Spotify evaluates any given artist’s market share. By that measurement, artists are benefitted by Spotify only slightly more than they are by torrenting.

But Spotify isn’t just a pay-per-stream service. The app collects data on the location and listening habits of all of its 24 million users (6 million of whom are paid subscribers to their premium service). Why does Spotify have to be, in the words of Radiohead frontman Thom Yorke, “the last desperate fart of a dying corpse”? Since data is the currency of our digital lives, what’s to stop artists and labels alike from profiting not off what they get from Spotify, but what they learn?

Enter Vulfpeck, an independent funk band that made headlines after releasing their latest album, Sleepify. Far from the freakishly danceable tracks they’re known for creating, the former session musicians’ latest effort is 10 tracks of absolute silence. However, unlike John Cage’s famous 4’33″, Sleepify isn’t an avant garde experiment. Instead, Vulfpeck is encouraging their fans to enjoy the sound of silence at times they wouldn’t normally listen to anything. According to the band, if you stream their album in your sleep (hence the album’s name) you will earn them just under $6 a night.

While that amount is small enough to seem like Vulfpeck might have a better chance busking in Union Square, they actually plan to use the proceeds to fund a nationwide free tour. Using Spotify’s location data, the band plans to tour where Sleepify is listened to the most, giving a free concert their fans funded by gaming Spotify’s system.

To be clear, this is not a system every artist—and perhaps not even Vulfpeck—can rely upon for revenue. However, tours remain one of the most reliable money-making aspects of the music industry. While album sales have regularly declined since the end of the halcyon 1990s (even when you consider digital downloads), concerts are doing better than ever, earning $5.1 billion last year (though the biggest earners are increasingly older acts like Bruce Springsteen and Madonna). To paraphrase that infamous anti-piracy commercial, you can’t download the experience of a live show.

And Spotify could easily be a part of this growth. While tour stops have been based on record sales data and radio plays for decades, those are increasingly becoming poor measures of where to find ticket-buying fans simply because the sample size of album-buyers and radio-listeners is rapidly shrinking. Spotify location data, as organized by the recently acquired think tank The Echo Nest, can actually provide a more accurate depiction of how artists can optimise their touring revenue.

For an example, let’s look at R&B superstar/perverted deviant R. Kelly. Kelly made four stops in California on his last tour, even though he’s ranked 159th for Spotify listens from that state. By comparison, he’s ranked 39th in Wisconsin and made precisely zero stops there. While it may seem absurd to tell the filthing king of R&B to pay more visits to Madison than to San Francisco, he could build higher dividends and loyalty with fans who don’t see a lot of top-name soul artists come through their town and therefore may be more likely to show up when they do. Even with the differences in population, visiting targeted-yet-remote regions can create revenue outside the typical Ticketmaster model by pleasing undernourished fans.

With data from Spotify, tour managers and artists can more effectively build fanbases across the country simply by showing up. Of course, this is not an entirely new model: Bands like Insane Clown Posse and Phish—who both rely heavily on touring revenue—have built small, devoted fanbases across the country, netting more than $120 million for the latter. While profitable, the Phish model of asymmetric touring actually allows for smaller bands like Vulfpek to have larger control over their own revenue. And Spotify can be the catalyst to make it happen.