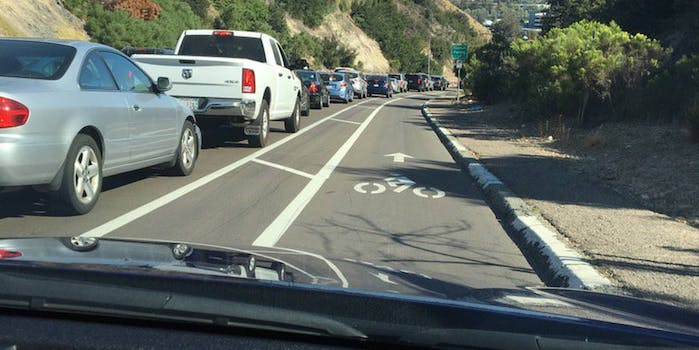 He only did it for a 'few hundred feet.'

Peter King is perhaps the preeminent NFL writer of his generation, and when his career is finally complete, his legacy—his long tenure at Sports Illustrated, his work on MMQB, and his quality writing and reporting—will be as one of the great sports journalists of the era.

But that doesn’t mean he doesn’t write dumb tweets that his critics love to remind him about, particularly one in which he gleefully broke the news to a random Milwaukee restaurant host that Robin Williams had died and another in which he used the exact wrong word during the Ferguson saga.

But what he tweeted Friday was actually dangerous, and it didn’t go unnoticed by the San Diego police department, which scolded King in a subsequent tweet (full disclosure: When I was an NFL reporter, I interacted with King a handful of times, and he was always more than pleasant and helpful to me).

SAN DIEGO-I told driver @JennyVrentas to get to Qualcomm as fast as she could. I have no comment on this. pic.twitter.com/iIzCcAAOzA

Not only did King implicate his co-worker in a crime, he conjured the wrath of those who dislike him on Twitter and those who ride bikes.

.@SI_PeterKing @JennyVrentas
This is not right.
A human being could have been on a bike in that bike lane. A human with a family.

Awful judgement on both of you. Five cyclists have been killed in San Diego this year due to moves like this.

@mlse @JennyVrentas who cares about endangering cyclists? Hope they got to the so important preseason football game in time

And you know who really didn’t think the tweet was clever? The San Diego police department.

This is not okay. Plan ahead and leave early for the next @Chargers game. #stayclassysandiego https://t.co/oxVyM9vROq

On Monday, King apologized by writing, “My apologies to those offended (and you should have been) by my tweeting the photo the other night of our car in the bicycle lane for a few hundred feet near Qualcomm Stadium, hustling to get there in time for an interview. Dumb by me for sure, and I’m sorry for the post.”

San Diego is usually known as a pretty chill city. But as we all know too well: Hell hath no fury than a cyclist whose well-being isn’t taken seriously by drivers, journalists, and journalists who drive cars.