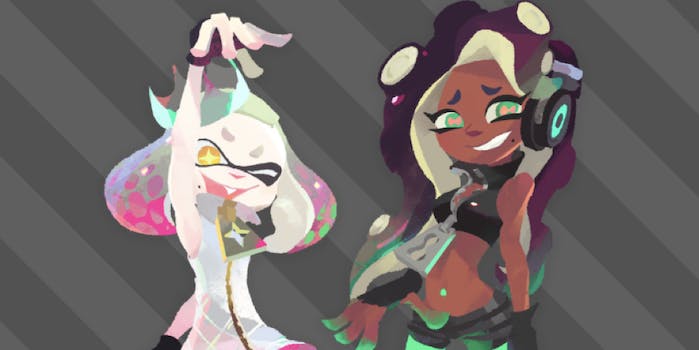 Screengrab via Nintendo of America/Twitter

Nintendo’s ’Splatoon 2′ is being overrun with memes

The ink is flying, and so are the memes.

Nintendo’s inky, squid-centric shooter, Splatoon, got a sequel in July, and Splatoon 2 is turning out to be just as much of a boon to the meme community as it is to gamers. Everyone’s swooning over the game’s new idol characters, Pearl and Marina, and horribly abusing Splatoon 2‘s in-game chat, which lets players draw messages to each other, to produce hilarious, off-color memes.

Splatoon fandom has thrived on Tumblr in particular: Tumblr told the Daily Dot there have been more than 2 million posts about the new game since July 1.

Apparently, it all started when one person said “Stop drawing furries,” prompting furry fans to draw even more in defiance. Now the game’s main lobby has turned into an artistic battlefield of “furries vs. normies.”

i see so much people posting furries on splatoon and there so much i dont hate furries but dang its like a war rigth now pic.twitter.com/DNjpHZLcxz

Some people have really put a lot of time into their Splatoon meme art. For example, one player recreated a pixel-perfect black-and-white version of the “white guy blinking” meme:

Yet another was representing Star Wars Prequel memes, one of the year’s biggest trends, with a drawing of Senator Palpatine:

Somebody has some skills. #Splatoon2 #NintendoSwitch pic.twitter.com/kjvrlT6Z8K

The results of the Ketchup vs. Mayo Splatfest, an in-game fight to determine the best condiment, are also a hot topic. (FYI, mayo won.)

There is a lot of hurt today. #Splatoon2 #NintendoSwitch pic.twitter.com/nXix1FA7ax

As you can see, the meme potential in Splatoon 2 is extremely high. The game itself is a source of memes, with its memorable characters and Splatfests, but Splatoon 2 is also an entirely new medium for meme delivery. The limitations of the chat system make it fun and challenging to translate existing memes to the Splatoon world, and there’s a neverending backlog of beloved memes that could make their way there.

Wherever there is freedom of expression online, there will be memes. The only way we see this trend ending is if people stop playing the game.

Just remember, as you post your dank splat memes, that there are actual kids playing, too.