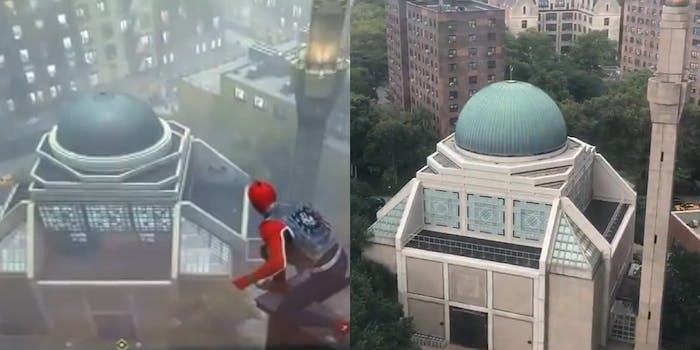 The attention to detail in the game is unreal.

Gaming has come a long way. Some of the newer titles look so realistic, you could swear the fantastic visuals in front of you were real.

That’s what happened to one particular Marvel’s Spider-Man fan, who happened upon a building in the popular PlayStation 4 exclusive that looked familiar.

Twitter user @theRobertPagan was having a grand old time zipping around the realistic version of New York City in the game when suddenly he stopped, his Spidey poised on the corner of a high-rise looking down at a distinct-looking building. Plot twist coming up next, guys.

I was playing Spider-Man when I noticed a building that looked familiar… pic.twitter.com/zDOmmNfTCG

The Twitter clip continues as he turns to the right and looks out the window. Bam! The same building can be seen from his window. You couldn’t ask for a more perfectly positioned find if you tried. The building is the Islamic Cultural Center of New York, which can be found in Manhattan. It’s the first mosque built in the city.

One of the coolest aspects of Marvel’s Spider-Man is indeed its attention to detail, especially when it comes to the city. There have also been some fun extras in-game, such as a smattering of LGBTQ pride flags and even some hilarious costumed characters to look out for.

Pagan’s clip is pretty amazing, and as you probably imagined, Twitter users are freaking out. It’s a very meta gaming moment.

I’m telling you they did great job, I be out here swinging to locations where I made coffee deliveries when I was out there lol

The detail of this game is insane

Of course, this raises several questions. Is Spidey on the top of this guy’s building right now? How many other folks can match real-life landmarks to the map in the Spider-Man video game?

GET ON YOUR ROOF SPIDEY'S UP THERE

Cue everyone in New York scrambling to their rooftops to catch a glimpse of their friendly neighborhood Spider-Man.