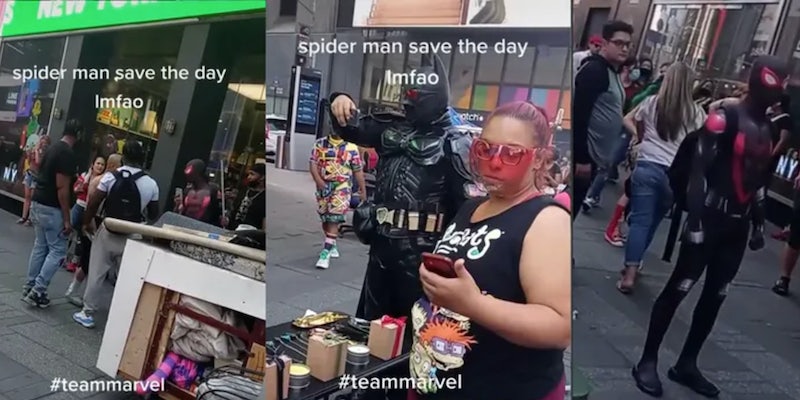 And Batman filmed the video. And there is a topless woman present.

Spider-Man is still apparently busy keeping the streets of New York safe in 2021—or at least, someone in a Spidey suit is.

A viral TikTok video shows a person in a Spider-Man suit breaking up a fight near 42nd Street. The TikTok video was posted by user @diice_queen_ofkarma on Friday, eventually making its way to the “Public Freakouts” subreddit.

In the video, a bald man with no shirt picks up a pole and advances toward a man on the street, presumably to engage him. Then, the woman filming the video can be heard saying, “Ope, Spider-Man took a pole.”

Off to the side of all the action, someone else wearing a Batman suit stands filming the exchange.

After taking the pole from the bald man, Spider-Man receives praise from onlookers, who shout, “Spider-Man just saved the day.”

The masked hero and the bald man shake hands following the incident, which leaves it unclear to the viewer whether or not the event was staged.

Commenters went wild for the video on TikTok, where Batman’s inaction and the presence of a topless woman drew many jokes.

New York just isn’t Gotham, the fictional city that Batman frequently saves with various gadgets—which means what happens there is apparently not Batman’s concern, according to TikTok user @piffit.

“Batman over here like: ‘Not my city, not my problem,” @piffit wrote.

On Reddit, commenters really appreciated just how much was happening in the video.

“There is so much sheer humanity in this video,” u/SHITFUCKPOOPBUTT9001 wrote. “You got spiderman, you got batman, you got weird shirtless dude.”

And the topless woman was nothing new for those who are familiar with New York.

“I guess the lady with her tits out isn’t even worth mentioning in NYC anymore,” u/mnemy wrote.