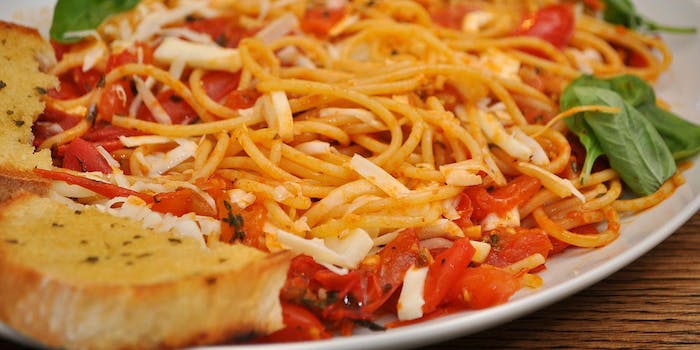 Spaghetti Warehouse just dropped the feel-good hit of the summer

Spaghetti Warehouse, the Irving, Texas-based chain restaurant most often visited after graduations or on Grandma’s birthday, is turning 40 years old this year. To celebrate, there’s a flashy website devoted to the company’s anniversary, which details all the big things they have in store, like 11 new dishes!

They have a decent social media presence, but let’s face it, “the kids” are not flocking to Spaghetti Warehouse on Friday night to get faded on toasted ravioli. I mean, there’s trolley seating in the restaurant. So, in an attempt to reach a more youthful, hip fanbase, they’ve commissioned an original song.

Their “Warehouse Radio” player reveals a two-minute pop song, complete with a fist-pumping, Auto-Tuned chorus encouraging, “Come enjoy our original flavors. Have some fun with the friendliest waiters.” The song is apparently “an original composition by a Grammy award-winning production team,” which was created “exclusively” for the anniversary.

The song is a bit derivative, echoing Kelly Clarkson’s “Since U Been Gone” in terms of melody and structure. And yes, a song about meatballs is ridiculous, but the pop-song formula at work here has sold us on worse. Minutes later, it was still in my head. The chorus (“We are, we are, we are Spaghetti Warehouse!”) rolled around my brain like a hamster ball. Damn that Grammy award-winning production team.

They could have gone the easy route and just parodied a popular song (“Up All Night to Get Gnocchi” comes to mind first), but they might have just released the anthem of the summer.

Did they know a certain subsection of media snarkhounds would pick up on its absurdity, and ironically push the song into relevance? Suddenly craving five-layer lasagna, just like the song says.

Looks like Spaghetti Warehouse’s attempt at cultural dominance via jingle is working. The hype is catching on. There’s already been a cover of the song, on ukulele no less. Everything is going as planned.