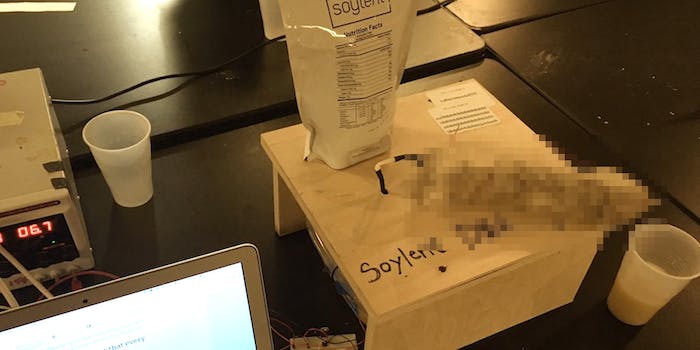 The future is here.

Nope, it’s not the name of an up-and-coming indie band. It’s quite literally what it sounds like: a phallus made out of the nutritious liquid meal substitute.

Nicole He, Katherine Pan, and Chino Kim are the geniuses behind the creation, which ejaculates Soylent when you enter “self-validating praise for Soylent” into a browser. The trio cooked up the creation as part of the 2016 Stupid Shit No One Needs & Terrible Ideas Hackathon, where other participants breathed life into apparatuses like the Assistive Pizza Eating Device and a 3Cheese Printer.

Soylent Dick: a dick made out of Soylent that ejaculates Soylent when you type Soylent mantras into the browser. pic.twitter.com/hhnlCueaqv

He runs through building the project on her website. The Soylent Dick was erected by shaping a Soylent-based Play-Doh mixture around a frame built with a hollow wire mesh frame and running an aluminum tube through the structure. Rubber tubing and plastics straws were implemented, and voila, the Soylent Dick was alive.

As for getting the cock creation to expel the delicious Soylent, it was all coding that the trio has made available on GitHub. The keywords to get the dick going are mantras from the Soylent 1.5 release notes.

Pan had already been thinking about trying to make a clay-like substance out of Soylent and fashioning a huge phallus sculpture out of it, drawing some inspiration from the Mayan stone phalluses of Uxmal.

“My personal goal for the Hackathon was to stretch my programming skills and also make something disgusting,” He wrote in an email to The Daily Dot. “We knew we wanted to work with Soylent, and I wanted to code something related to typing in a browser. In the middle of the night before, it struck me that making semen out of Soylent would be a great idea. For a while we wondered, would it be better to make the dick out of Soylent, or the semen out of Soylent? Clearly, the correct answer was ‘both.'”

As for Kim, Soylent Dick sort of just fell into his lap. He was wandering by in the middle of the project at the Hackathon and joined up, helping immensely with the coding and construction.

“I think Soylent and the culture surrounding it is ridiculous, and I’ll jump on any project that involves private parts and the things that come out of them,” Kim told The Daily Dot.

You can find more information (and gifs) about our Soylent-jizzing Soylent penis here: https://t.co/ijX1cmuJXl pic.twitter.com/keuZtwfBgp

As well as explaining Soylent Dick’s “how” on her website, He also runs through the “why” behind this project. Soylent has been largely used by coders as a time-saver, which was a major motivation behind the fluid’s creation. The Soylent Dick creators have pondered what it means to design a product for a field that has a huge gender gap and for people who “can afford to eat well to choose to reject food.”

Pan cited a story by Antoine de Saint-Exupéry to sum up her feelings about Soylent and wasn’t all too concerned about what the creators of Soylent might think about the project. “I didn’t think about this,” she said. “This project was about dot me.”

As for that whole “eat a bag of dicks” joke? Now you really can.