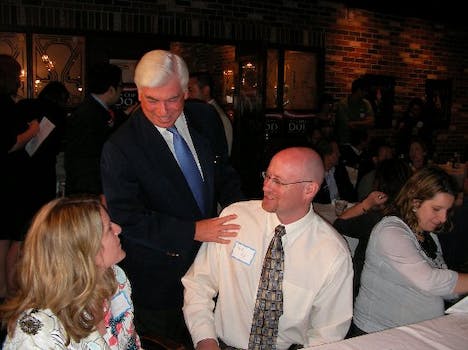 Former Senator Chris Dodd, the chairman and CEO of the Motion Picture Association of America (MPAA), said Tuesday that he was “extremely pleased” with the Democratic National Committee’s new stance on Internet freedom. He gave a similar statement about the Republican National Committee.

When the DNC released its official party platforms four years ago, it only devoted a single sentence to Internet freedom. Republicans didn’t even mention it. In 2012, both parties explicitly stated that “Internet freedom” is one of their priorities.

It’s hard to not tie this turnaround to the fact that millions of potential voters noticed or participated in January’s Internet-wide protests against the Stop Online Piracy Act (SOPA), which was pitched as a battle between a free Internet versus entertainment groups, like the MPAA, that wanted to enforce severe copyright protection.

But here’s where it gets tricky: Dodd has declared that both parties’ stances on Internet freedom are actually victories for the copyright lobbyists.

According to watchdog group OpenSecrets.org, the MPAA spends at least than $1 million every year in federal lobbying and even more in election years. In January, when it looked like SOPA was poised to fail, Dodd openly threatened to cut funding to Congress politicians who opposed the bill.

Yet, Dodd has effusively praised the DNC and RNC in regards to Internet freedom, unequivocally saying they both support his drive for increased protection of American copyright online.

It raises the question: Is Dodd finding support from politicians when there is none? Or are both parties trying to have their cake and eat it too—by pandering to the MPAA and telling voters they stand for Internet freedom?

There’s really very little to go on from each party. Democrats only use the phrase “intellectual property” once, as if in passing: “The [Obama] administration has built partnerships to support an Internet that is secure and reliable and that is respectful of U.S. intellectual property.” Republicans don’t mention it at all.

Of Democrats, Dodd said, “I am extremely pleased that the Democratic Party’s platform language reinforces the critical importance of protecting America’s intellectual property.” Of Republicans, he took more of a stretch: “As the party points out, the internet has been for its entire existence a source of innovation, and it is intellectual property that helps drive that innovation.”

Still, Democrats, at least, certainly had a chance to define themselves as more forcefully in support of Internet freedom than Republicans. A group of House Democrats openly urged the DNC to adopt language from the Declaration of Internet Freedom:

“We strongly recommend ensuring the platform includes this or similar language: ‘The Democratic Party stands for global Internet freedom, the free flow of information online, a free and open Internet, and protection from online censorship.’”

As those Representatives noted, the party could “make it clear that these principles are a long-term priority for us, and that we are best equipped to champion these principles.” It surely would have increased their stock with some voters who strongly believe in Internet freedom.

It’s unclear if Democrats intentionally used watered-down language in order to protect their relationship with the MPAA. Representatives for the DNC, as well as for the RNC, did not respond to requests for clarification on their stances on Internet freedom.