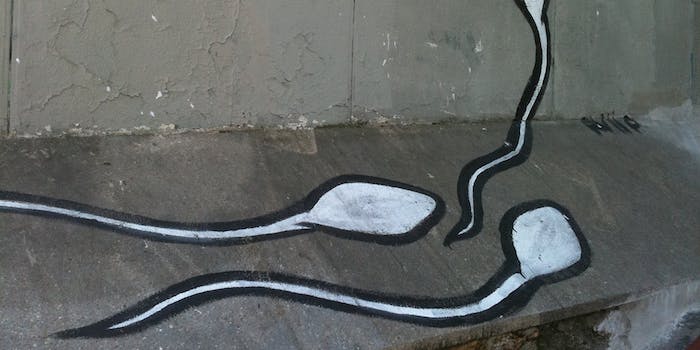 It could get sticky.

Earlier this week, the Guardian reported that United Kingdom’s national sperm bank only has nine donors. Nine! Like, not even ten.

Perhaps this is due to a law established in 2005 that allows “any child born after that time the right to trace their biological father” when they turn 18. Perhaps it’s the fact that men who want to donate might have to go to the clinic twice a week for up to four months—and only receive the equivalent of $53 per visit. Perhaps procreation just isn’t as cool as it once was.

If a man isn’t jerking off for a good cause, he better pay up. Instead of compensating men for donating sperm, how about we punish men who don’t donate sperm? Something to the tune of $53 for every wasted orgasm. How would the government monitor this? Oh, naïve reader, don’t you know that the government is always watching you?

Boys on the precipice of puberty are perfect sperm donors because they are most likely virgins, which means they don’t have any sexually transmitted diseases; additionally, they’re looking for any excuse to wank it.

Photo via Grace Hebert/Flickr (CC BY 2.0)