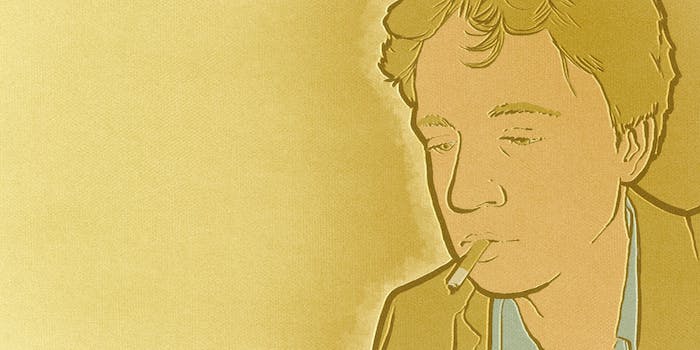 Barrett Brown's treatment in prison reminds us why it's time to ban prison's most cruel and unusual practice.

The Eighth Amendment of the United States Constitution may not have as much political cachet as the First or Second, but it’s a safe bet you’re familiar with one of its most important phrases (italics added for emphasis): “Excessive bail shall not be required, nor excessive fines imposed, nor cruel and unusual punishments inflicted.”

This brings us to Barrett Brown, a self-described “mild-mannered freelance journalist, activist, and satirist” who was sentenced to 63 months in prison last January on a number of charges related to his work with the controversial hacktivist group Anonymous. His incarceration is troubling enough in its own right (Reporters Without Borders cited it as a main reason for downgrading America’s ranking on freedom in the press), but now his social media followers are reporting that prison officials have moved him to solitary confinement.

That last detail is particularly important, since the United Nations has clearly stated that holding a prisoner in solitary confinement for longer than 15 days constitutes torture. Then again, the United Nations has also called for abolishing solitary confinement except in the most extreme cases, while our own Supreme Court has established an “unnecessary and wanton infliction of pain” standard for determining if conditions of confinement violate the Eighth Amendment.

Of course, because our nation’s top bench has yet to officially recognize that solitary confinement itself inflicts unnecessary pain, last year more than 80,000 Americans experienced some form of mandatory isolation. This practice must end.

Because our nation’s top bench has yet to officially recognize that solitary confinement itself inflicts unnecessary pain, last year more than 80,000 Americans experienced some form of mandatory isolation.

Not surprisingly, studies of prisons in America’s three most populated states (California, Texas, and New York) have found that suicide rates are significantly higher among inmates who have been held in solitary confinement than within the general prison population.

In fact, the psychological harm caused by forced isolation is so devastating that scientific researchers rarely study its effects on civilians, although when McGill University attempted to pay graduate students to live in comparable conditions for six weeks in 1951 (for an experiment on the effects of sensory deprivation), none of them lasted more than seven days.

If you believe this is acceptable because only the most vile criminals are subjected to it, think again.

“You might assume all inmates sent to solitary are the ‘worst of the worst’—rapists and murderers who continue their violent ways even behind bars,” wrote Scientific American in a 2013 report. “But in fact, many are placed in solitary for nonviolent offenses, and some are not even criminals, having been arrested on immigration charges. Others are thrown into isolation cells ‘for their own protection’ because they are homosexual or transgender or have been raped by other inmates.”

This is why someone like Kalief Browder, a New York City teenager who spent more than three years in prison despite never being convicted of a crime, ended up spending so much time in solitary confinement while behind bars, despite posing little threat to those around him.

New York City Councilman Daniel Dromm told the International Business Times about the appalling conditions he was subjected to. “It was claustrophobic. It smelled like urine. There was graffiti on the walls and the paint was peeling,” said Dromm. “The bed was filled with dirt, grease, grime, and the blanket was covered with mildew and mold.”

Browder took his own life this June.

And Barrett Brown? “Someone made hooch (alcohol) and a bunch of inmates had been drinking it. Officials came and gave them all breathalyzers, and they all passed,” claims a campaign to “Free Barrett Brown” on TwitLonger. “Then they searched Barrett’s locker (his only) and found a glass he had hidden in there.”

Along with the accusation that Brown was “singled out” because of his political activities, the site claims that he was “not allowed to bring belongings, including his file of legal papers and his prescription” and that he has not been told how long he will be kept in isolation.

If there is a sliver of good news in all of this, it’s that many American political and judicial leaders have started speaking out against and working to abolish this practice. Last year Sen. Cory Booker (D-N.J.) and Sen. Rand Paul (R-Ky.) co-sponsored a prison reform bill that, among other things, would prohibit the use of solitary confinement at juvenile prisons except when necessary to protect the safety of others at the facility.

Studies of prisons in America’s three most populated states have found that suicide rates are significantly higher among inmates who have been held in solitary confinement than within the general prison population.

Kennedy is right, and it certainly doesn’t help that our prison-industrial complex is already a disgrace to the rest of the world. We have more prisoners than any other country (with more than 1.5 million people sitting behind bars as of December 31, 2013), racial minorities are disproportionately more likely to spend time in jail than their white criminal counterparts, and recent statistics from the Federal Bureau of Investigations reveal that one out of three Americans is forced to go through life with the burden of a criminal record.

Even in the context of so much damning information about American prisons as a whole, however, our rampant use of solitary confinement stands out as particularly heinous: It is practically impossible to reconcile America’s use of solitary confinement with the civil liberties protected by our Bill of Rights. We shouldn’t need legislators or judges to tell us that it is cruel and unusual to punish nonviolent criminals in a way that will permanently damage their mental health.

Unfortunately, because the public continues to ignore the plight of its inmates, thousands of Americans continue to languish under mental torture every day. Some of them are political prisoners like Barrett Brown, others are wrongfully imprisoned innocents like Kalief Browder, and many are actually guilty of offenses that warrant incarceration.

None of them, however, should have to forfeit their basic constitutional or human rights. When that happens, we not only violate their rights, but desecrate our own most important ideals.