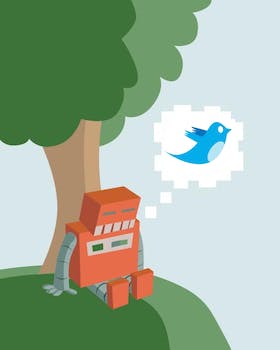 Why socialbots can be a Twitter user’s best friend

A new study showed the automated bots could help increase a Twitter user's follower count by retweeting messages and by recommending the account to contemporaries.eaching out to other users on the account's behalf.

If you’ve ever been on Twitter, chances are you’ve had one of your messages retweeted by a bot posing as a real person.

While most get annoyed at the prospect of being trolled, a group of researchers has found that bots foster human-to-human activity on the microblogging network.

In a new study from the Pacific Social Architecting Corporation, researchers have found that Twitter bots—automated programs also known at socialbots—that retweet a message because of certain terms mentioned in it can help increase the original user’s follower count by 43 percent.

Over the course of 54 days, the researchers monitored 2,700 Twitter accounts broken up into groups of 300. After a bot-free control period of 33 days, nine Twitter bot were activated for the remaining 21 days of the experiment. And that’s when thing got interesting.

In the experimental period, socialbots were able to attract a total of 561 followers, an average of about 62 followers per socialbot, reported the study. One successful tactic socialbots used to try to connect other users was to suggest to one user that he or she might be interested in following another particular user.

One group even saw a 355 percent increase in its connection rate, thanks to its bot.

For most people, socialbots are just a pesky consequence of using Twitter. But for users eager to make some cash through advertised tweets, this study has shown that socialbots may be the easiest way to increase your followers and microblogging footprint.