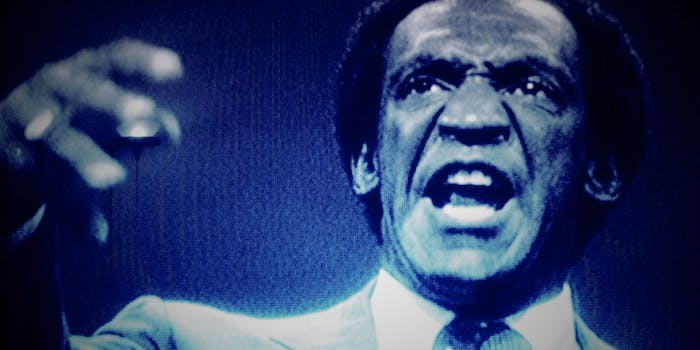 There's been a monumental shift in how we talk about sexual assault.

As it stands, 46 women have accused actor Bill Cosby of sexual assault. Taking into account the statistic that less than 50 percent  of all rapes are reported, it’s staggering to consider the number of women who were allegedly violated by the man venerated for his groundbreaking role as the popular dad, Cliff Huxtable in the long-running TV sitcom The Cosby Show.

After a surprising about-face by Montgomery County’s District Attorney’s office in Pennsylvania, Cosby, who is 78, was officially charged with aggravated indecent assault on Wednesday. Andrea Constand alleges that in 2004, Cosby drugged and assaulted her at his home in a Philadelphia suburb. After an investigation in 2005, Constand’s accusations were dismissed by then-District Attorney Bruce Castor, who has since been highly criticized for blaming Cosby’s victim. Castor is on record calling for the victim to share culpability in her assault, fueling already rampant myths that rape accusations often happen when women wish to cover up “regrettable sex.” If Cosby becomes one of the three in 100 rapists to spend time in prison, he stands to serve  five to 10 years behind bars and pay a fine of up to$25,000.

It’s worth considering what factors contributed to emboldening the DA’s decision to move forward with formal charges against the infamous comedian as the clock dramatically counted down on statute of limitations, which were set to expire on Jan. 1.

The facts surrounding this criminal case remain unchanged from 2005. But the the cultural climate has changed. And social media’s role in formally charging Cosby can’t be overlooked. After all, it was a video posted on YouTube of a stand-up routine by comedian Hannibal Buress that first brought widespread attention to the allegations against Cosby.

Social media is unquestionably responsible for some of the incremental shifts we see in rape culture.

Nor can we dismiss the larger impact social media, from Facebook and Twitter to Instagram and Snapchat, has had on what is often referred to as “rape culture.” Our always-online, always-sharing social media-driven lifestyles definitely correlate with a noted increase in sexual assault reporting.

Buress’s video went viral, and thanks to Facebook and Twitter, Cosby wasn’t just being called out in a relatively anonymous comedy routine. Instead millions of people were watching a male comedian refer to one of the most celebrated and adored actors of television history as a rapist. We became witnesses, and the fans who grew up watching Cosby play Dr. Huxtable in syndicated reruns were posting, sharing, retweeting, and asking questions.

Social media provides a massive and previously unavailable platform to talk about sexual assault. And through this shared discourse we inevitably sluff off assumptions, stereotypes and myths that previously discouraged victims from coming forward with reports of their rapes.

With the rise of social media, it has become monumentally more difficult for our online culture to ignore the realities of rape. It is becoming impossible for us to cling to antiquated myths like “she is lying” and “she must have asked for it” when rape victims share their stories in tweets, watching as their truth becomes viral content. No longer are details of a victim’s rape relegated to case files in a detective’s office. Precisely because of social media platforms, these cases now have the potential to travel around the world. And in many cases, like the 2012 incident at Steubenville High School in Ohio, the perpetrators posted their assault online, giving investigators hard evidence of the victim’s claims.

Rape allegations become less easy to overlook when they have 10,000 retweets.

Rape allegations become less easy to overlook when they have 10,000 retweets. In a time where we look to social media for our news, human interaction and our daily burst of oxytocin, it’s almost impossible to ignore the reality that rape happens with unbelievable frequency to women around the world, and we are suddenly being invited into the conversations.

Undoubtedly, social media also plays a negative role in rape culture, with police reporting instances of rapists constructing false narratives on their social media accounts and using the same platforms to groom and select victims. Unsurprisingly, only hours after his court appearance, Twitter is already full of people defending Cosby and blaming the women who he assaulted.

Due to problematic legal loopholes like statute of limitations on sexual assaults, or a result of silencing techniques by Cosby, it is unlikely that more charges follow Constand’s case against a man the New York Times said exuded a “casual indifference” to the accusations. Yet, their stories, both collectively and as individuals, represent a monumental shift in how we are talking about and understanding sexual assault, both on and offline.