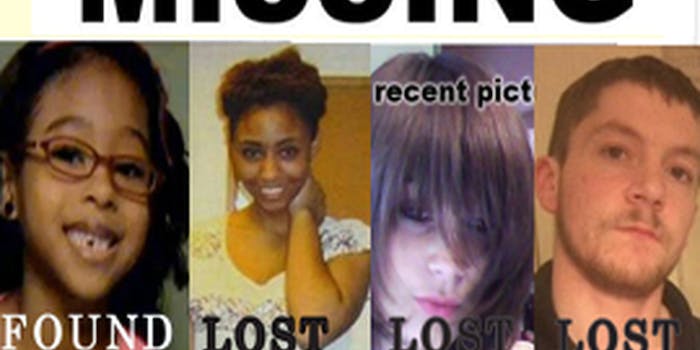 Can social media give a “signal boost” to true social justice?

Increasingly, on the Internet, the question isn't how can the village help, but how do you get the village's attention to begin with?

On Jan. 14—one day after National AMBER Alert Awareness Day—Tumblr, Twitter, and Facebook were flooded with thousands of posts and tweets spreading the word about the disappearance of Nailla Robinson, a 5-year-old abducted from her Philadelphia elementary school by someone claiming to be her mother.

In the middle of the frantic information chain occurring over Robinson, who was later found, Tumblr user lucids-dream raised an alarm of her own: for 15-year-old Callie McDonald, missing from her Florida home for the previous three days. “It would mean a lot to me if you guys reblogged this!” wrote lucids-dream. “She sits next to me in my 6th period and nobody has any idea where she is!”

The reblogs in search of Nailla Robinson? Countless.

The reblogs in search of Callie McDonald? Four.

Many factors influence which kinds of pleas for help get attention on Tumblr—the fabled “signal boost,” a term that refers to passing along an item of interest. The unique circumstances of the Robinson abduction made it an event, an urban legend in the making. In McDonald’s case, she and another girl went missing together, a likely case of two runaways and hardly something that would invest the average Tumblr user.

Or perhaps it’s simply that lucids-dream and the handful of people who stopped to reblog her PSA just didn’t have enough people following them.

It’s well known that certain news subjects receive more media attention than others, even if the stories are relatively similar. Whether social media can balance out that disparity by giving equal weight to items that would otherwise go unnoticed, however, is a tricky subject. In the case of missing persons, it takes a village to locate a child—and sometimes not even a village is enough. But increasingly, on the Internet, the question isn’t how can the village help, but how do you get the village’s attention to begin with?

15-year-old Bedria Williams has been missing since Jan. 19. According to a post made by blackandmissing, her family fears that she might have fallen victim to the sex-trafficking industry in Sacramento, Calif., where she was last seen. Williams’ sister allegedly contacted the Tumblr account, which broadcasts PSAs for missing African-Americans, to raise awareness:

“So far I have not been able to get our story aired on any station. I was told that they do not cover stories like Bedria’s because she ran away. 4 days after I rec’d that email that news station aired a story about a 14 year old boy who ran away from home, he just happened to be white.”

But while Williams’ story, and her sister’s plea, have gotten attention, racking up over 6,000 notes in less than 48 hours, hardly any of the other listings posted to blackandmissing in recent months have gotten more than several dozen notes. Daniel McCoy Moses, missing since June 2011—22 notes; autistic teen Chelsea Ramsey-Jones, missing since Jan. 14, 53 notes. Three people who never made it to Shreveport after New Year’s: 6 notes.

The question of what to give our attention to in a world, and an Internet, that increasingly clamors for it, is one that marketing departments tend to solve via emotion: If we invest in it emotionally, then we’ll buy it, support it, tell other people about it. The problem is that it’s impossible in the long run to emotionally invest in everything—even for the scant amount of time it takes you to hit the “reblog” button on Tumblr. The Onion famously coined the term “outrage fatigue” in 2004, which basically boils down to what a lapsed women’s rights activist once told me to explain the lapse: “It takes a lot of energy to stay that angry, all the time.”

The Internet stays very angry, all the time. Ordinary, everyday injustices don’t get any more attention in the midst of a raging sea of online anger than they do in the average police department. Just as with any other Internet project, for a signal boost to go viral, it has to have an edge. 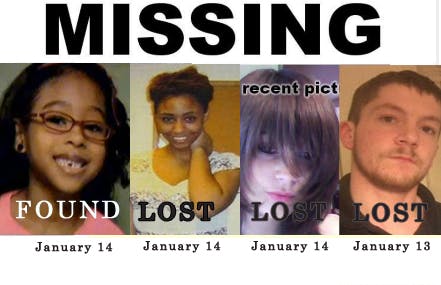 The greater the emotional ploy, the more successful the plea—even if it’s fake. On Tumblr and Facebook the proliferation of fake, unsourced, inaccurate, and non-fact-checked posts that still rack up thousands of reblogs, likes, and high volumes of outrage is well documented. These are the modern-day equivalent of the forest of scammers, political hoaxes, and unlikely urban legends that used to proliferate your inboxes before the days of spam filters and savvier modes of Internet etiquette. Among the false posts are a series of fake AMBER Alerts that have been circulating since roughly 2010: The most common has over 300,000 reblogs and prompted at least one user to attempt to make a fact-checking guide:  “How to evaluate fake and biased posts on Tumblr.”

But posts that urge readers to calm down and practice critical thinking—those seldom get passed on.

The upside is that when enough attention is drawn and a high enough level of investment takes hold, it can yield results, even if only one person is listening. Take the case of Jonnica Ellis, the alias of a woman who allegedly hoaxed a dying cancer victim and his family, all for the sake of getting closer to the Deadliest Catch star she idolized. After reading the story online, a Floridian named Amber McIntosh decided to take action. McIntosh told the Dot that she was “disgusted that somebody could do something like that… I’m pretty good at digging up random and obscure info online, so I just decided that I was going to help find this person.”

And she did. McIntosh hacked the social networks of the “Jonnica Ellis” alias, enlisted the help of members of Anonymous, bank employees, and authorities, eventually locating the family whose Facebook photos Ellis stole. IP matches allegedly confirmed the woman behind the hoax, though the victim’s family informed the Dot that the police investigation is still underway and no charges have been filed.

Still, while no official justice has been done, on the “Who is Jonnica Ellis?” Facebook page, the families involved have rallied hundreds of outraged supporters of their cause. McIntosh’s one-woman efforts may not be enough to bring about prolonged media attention or a full FBI investigation—but it may be enough to validate and provide closure for a grieving family.

But that’s more than the family of Brian Adam Gilley can say. So far this signal boost asking for help discovering his whereabouts has received only 6 notes on Tumblr.