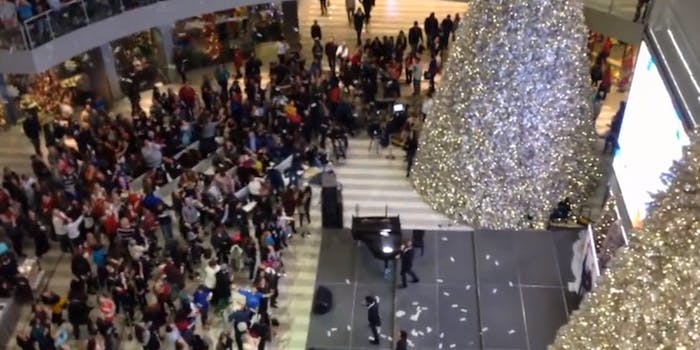 Serge Vorobyov thought it the perfect holiday move. Mall of America security did not agree with the sentiment.

Minnesota man Serge Vorobyov had a tough 2013, a year complete with a divorce, the loss of his cat, and a whole lot of other crummy stuff that’s culminated in his monetary assets getting decimated to the point of a single thousand dollars.

He wanted to spread true holiday cheer on Black Friday—the first day of the Christmas season—using whatever means he could, but his kindness ended up getting him in some trouble.

On Friday at the Mall of America, Vorobyov took his final $1,000—a lump sum gathered up in single bills—to an escalator overlooking a team of singers set to ring in the holiday season with a traditional arrangement of “Let It Snow” and, just as they began to sing, unloaded the thousand bills onto the crowd as if they were snowflakes falling from the sky.

Vorobyov loved it and thought it the perfect holiday move. Mall of America security did not agree with the sentiment.

A team of Bloomington police surrounded Vorobyov and slapped him with a citation for disorderly conduct shortly after the unloading.

“I don’t see how holiday cheer is disorderly,” he said in a YouTube video filmed after the incident. Bloomington police, however, as well as Mall of America brass, obviously disagree.

According to the Minneapolis Star-Tribune, a spokeswoman for the mall said that it’s the first time anyone has done something like this and that Vorobyov’s actions severely disrupted the performance and could have caused a serious situation.

Photo via Serge the Car Hauler/YouTube