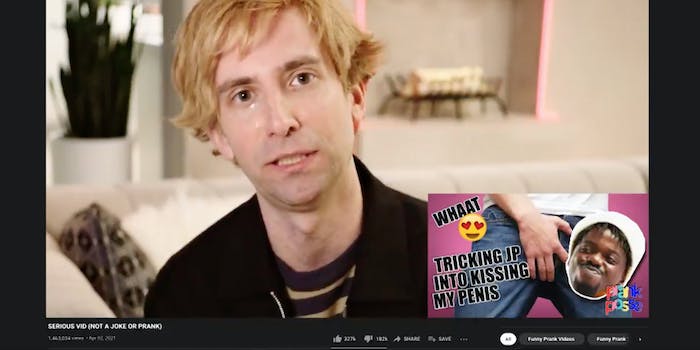 The skit—which stars Daniel Kaluuya and Kyle Mooney—has Mooney playing the role of a fake YouTuber named Marky Munro. “Marky” makes videos with a group dubbed the Prank Posse—like the Vlog Squad—and records an apology video addressing “things from [his] past that have come to light.”

Then, after dropping a TV on his friend (Kaluuya) as part of a prank, he makes another apology video where he tears up.

“It did not even occur to me that I could hurt my friend,” Marky says. “I know a lot of you thought my last apology was insincere, you were right. I was lying. But this time, I mean it.”

Then, Marky releases a final apology where he addresses criticisms over a kissing prank. Some viewers think this might be a reference to Seth Francois’ allegations against Dobrik. The fake YouTube star also claims he lost sponsorships, similar to Dobrik’s fate.

In March, Dobrik released a second apology video to his YouTube where he addressed a 2018 sexual assault allegation against fellow Vlog Squad member Dom Zeglaitis.

Despite the sensitive nature of the jokes, commenters seemed to love the sketch. According to Dexerto, one commenter noticed how Mooney’s wig was “Dobrik’s shape, but Logan Paul’s color.” Another added: “You know David Dorbik messed up big time when SNL is making jokes about him.”