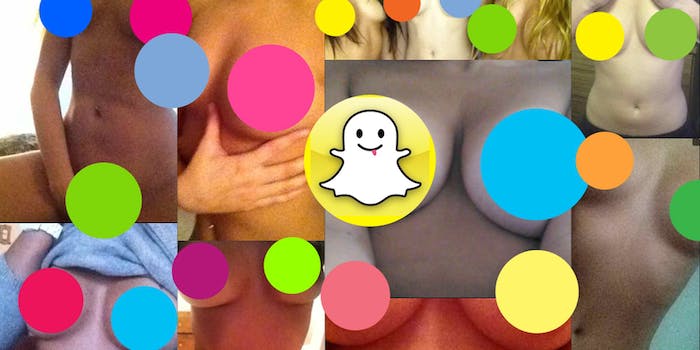 A new Tumblr blog by party photographer Kirill Bichutsky proves just how unsecure the nude photos sent with the Snapsohot truly are.

It’s surprising that it’s taken this long for “Snapchat Sluts” (totally NSFW) to exist. But we all knew it was coming — the minute you introduce a new way for teens to send each other nudes, the website collecting those nudes is only so far behind.

Snapchat was supposed to be the consequence-free iPhone sexting app everyone had always hoped for: you take your nudie pic, you specify a time limit (10 seconds or less), and you send it to your sext buddy, secure in the knowledge that it would be deleted from his or her phone when the time limit ran out. Sure, Snapchat’s CEO publicly claimed he didn’t think the app, currently among the iPhone’s most popular, would be used for sexting — “I just don’t know people who do that. It doesn’t seem that fun when you can have real sex,” he told TechCrunch — but we all knew the score. What else would you use an photo app with a built-in Mission: Impossible self-destruct timer for?

But as Buzzfeed’s Katie Heaney has pointed out, Snapchat has one fatal flaw: the iPhone can take screenshots. “When a user attempts to take a screenshot of another’s Snap, the photo’s sender is notified,” Heaney wrote two weeks ago, “but the screenshot still exists on the other user’s phone, where it can be shared with the rest of the world.” (This is far from Snapchat’s only problem, but it’s the biggest.)

And Snapchat Sluts, created this afternoon by enterprisingly sleazy party photographer Kirill Bichutsky (the man behind “Champagne Facials“), should make it pretty clear how easy it is to screenshot those Snapchats. Especially when you consider that all of these photographs have pretty high numbers on the countdown timers: mostly it takes less than a second to grab a screenshot, so not even your one-second Snapchat flashes are safe.

Happily, Snapchat Sluts isn’t a vindictive “revenge porn” site à la Hunter Moore’s IsAnyoneUp, and the women featured submitted their photos willingly (setting aside questions of the possibility of sexual agency under the patriarchy), directly to Kirill following a public call on his Twitter. “I was bored in a hotel room in Miami and decided to see how many girls would be willing to show me their tits,” he told me when I asked what inspired him to start the Tumblr. The answer: a lot. “The response was crazy on Twitter so I figured I’d build the site.” (Kirill asked that I share his Snapchat name, which is KirillWasHere. Go crazy, ladies and gentlemen.)

But if Snapchat Sluts is populated with women who knew what they were doing, it doesn’t take much imagination to see how easy it’d be to create a Snapchat-only edition of IsAnyoneUp.com. Which is why, even when Snapchatting, you should adhere to the time-honored rules of sexting: No identifiable clothing. No noticeable furniture. No face. And try to only send it to people who want to see it.