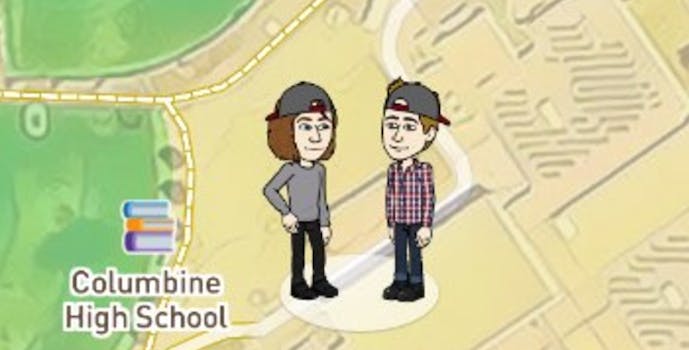 Snapchat just launched a feature that lets users see their mutual friends’ locations on a map, and it’s already a total privacy nightmare. Accidentally revealing your every move to your friends and significant others may be the worst thing about the update, but it’s not the only disaster the “Snapmap” has wrought. There are also memes—highly offensive memes.

It took no time at all for dank memers to transform the Snapmap into memes about their favorite “edgy” topics, like school shootings, terrorism, and the Holocaust.

Most of the memes abuse Bitmoji, the Snapchat feature that people typically use to transform themselves into cartoon characters. It works just as well for creating a caricature of a terrorist.

And Hitler secretly fleeing to Brazil. Of course, if you don’t want to make Bitmoji Hitler, you can just copy and paste him into the map.

And the recent spate of terror attacks in Paris:

and the 1999 Columbine High School massacre:

These memes aren’t funny or clever, but they are predictable. If there’s one thing edgy meme teens love, it’s experimenting with humor about shocking, taboo subjects. And if there’s another, it’s Snapchat. It’s no surprise at all to see them combine the two.

The most optimistic interpretation is that these memes try to mock and subvert the new map feature and its privacy-destroying implications, parodying a world where everyone—including people plotting horrible things—lives in a panopticon of our own making.