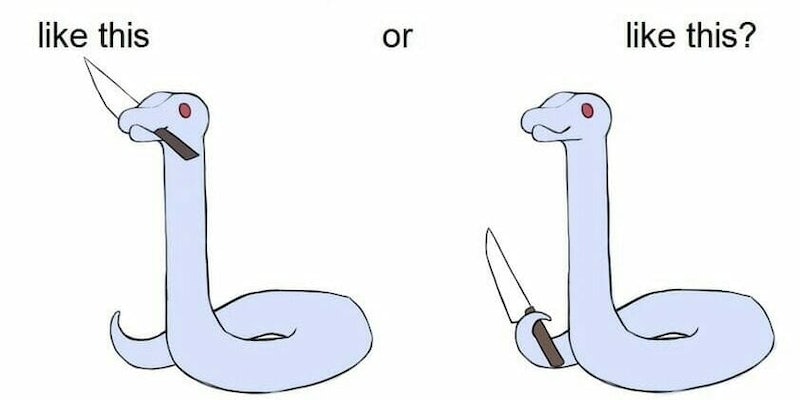 How would a snake hold a knife? Twitter seems to have found the answer

Regardless of where you fall in this debate, can we all agree that giving a knife to a snake is a bad idea?

Snakes are one of God’s precious creatures and an important part of our fragile and complex ecosystem, but that doesn’t mean they aren’t terrifying as all f–k.

If they aren’t injecting you with venom or swallowing you whole, they might just be stowing away on your airplane.

The point is that a snake is plenty scary enough on its own, and the last thing it needs is a knife, yet designer/writer Chappell Ellison couldn’t help wonder: If a snake did choose to weld a knife, how would it hold it?

“Finally found a reasonable question,” she wrote on Twitter before posting an image that was one part interesting logic problem and one part glimpse of the worst possible dystopian future.

“If a snake wields a knife” reads the text in the image “would she hold them like this or like this?”

The viewer is then presented with the equally unpleasant option of a snake holding a knife in its mouth, or wrapped in its tail.

Admittedly, the snake in the picture is pretty cute, but that doesn’t make the prospect of a knife-wielding serpent any more desirable.

It’s unclear at this point where the image originated from. It was posted by on Tumblr by a user named Marjahh on July 8, but in her post she wrote: “I bring to you, an old meme.” Does that mean she found the drawing somewhere else? Or perhaps she drew it but the caption refers to the drawings similarity to the old “How would a dog wear pants?” debate.

Regardless of the new meme’s origin, Twitter had some thoughts on the matter.

If she holds it with the tail she can also use her teeth as weapons so attack will go up but the knife could be easily knocked out of her tail hold so defensively he Mouth would be better. I say it depends on the anticipated fight! (Go snek go! Killem!)

Evidence for the picture on the right. pic.twitter.com/vQ9m78j7oO

One woman, who goes by @ToniMacAttack on Twitter, went so far as to ask her snake-breeding brother to solve the riddle, and he happily obliged.

She wrote: “Today in ‘I asked my snake breeder brother a question with a funny snake photo and should’ve expected this response.'”

In the included screenshot of her text exchange, the brother explains: “Arboreal species might be able to use their tails better but the most fossorial and ground dwellers don’t really have very muscular or long tails. So I’d say it depends on the physical makeup of the snake it’s self [sic]. The picture looks like a ball python so I say the first one.”

So there you have it. If a snake comes out you with a knife, it will probably be holding it in its mouth. Good to know.