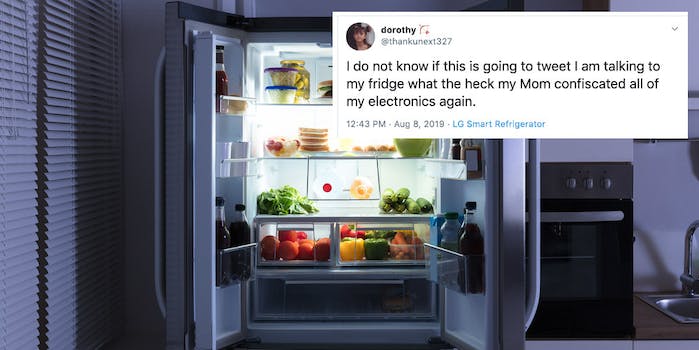 Teen claims to send tweets from smart fridge after getting grounded

How many internet-connected devices does her family own??

Having your phone confiscated is a standard teenage tragedy. While the usual attempts to get around this kind of grounding are nothing to write home about, Twitter user Dorothy (@thankunext327) rapidly became an internet hero for her creativity and persistence in the field. She claimed to tweet from a Nintendo 3DS, and then an LG Smart Fridge.

Dorothy, who created her Ariana Grande stan account only last month, initially tweeted on Aug. 4 that “she was leaving forever” because her mom had taken her phone.

Then her mother found out and appeared to send this tweet from her account: “I seen that Dorothy has been using twitter on her Nintendo. This account will be shut down now,” along with a picture of the Nintendo 3DS for evidence. This is when the story started to feel suspicious—her mother found a way to access her daughter’s account, took a picture of her 3DS, and decided to send this tweet to her followers?

However, Dorothy then began tweeting from a string of increasingly unlikely devices, ending with her family’s smart fridge.

It turns out that you can do basically anything with a smart fridge, up to and including playing Doom on it.

man, the future is wild. Even our refrigerators are super computers. You play DooM and get ice cubes from the same damn machine! pic.twitter.com/jviwX9PMCd

Smart refrigerators like the one Dorothy apparently tweeted from are connected to the cloud. Some smart fridges have touchscreen monitors and the ability to view apps. But it’s also possible to edit the name of the device that you’re tweeting from, and there are multiple guides online that detail how to do it. Tweeting from a ridiculous-sounding smart device is a meme in itself.

So, naturally, some people are wondering if Dorothy’s journey to send a tweet without a phone is one elaborate prank.

After Dorothy went viral and people started using the hashtag #FreeDorothy, user @successfuliana detailed in a long thread how she thought Dorothy was also acting as another person online.

But most Twitter users seem to support Dorothy’s WiFi-enabled journey—whether or not it was real. On Tuesday, she thanked her supporters in a tweet (which was apparently sent from—you guessed it—the LG Smart Fridge).

“I don’t know how I got this much support thank you so much to my supporters and @twitter this is crazy I would be lost without you and given up. I’m trying to get my things back fast so I can thank you properly!” she wrote (or said to the fridge).

The account now has more than 25,000 followers, and #FreeDorothy sparked a lot of memes.

Dorothy trying to tweet on her wii-u from minecraft #FreeDorothy pic.twitter.com/MO1hkbaz3j

Not everyone approves of Dorothy’s actions. “Girl, I will call your mother myself,” one user tweeted to her.

But, for the most part, people praised Dorothy’s commitment to tweeting.

We stan a legend, shouting at her refrigerator.

It was unclear whether some responses to Dorothy’s tweet were parodies. “My 12-year-old figured out how to evade texting time limits by using Alexa and a discarded Fitbit,” wrote user @Popehat.

Some actually were parodies. “My 4 year old figured out how to use twitter by using duct tape, a cat, and a hello kitty action figure,” wrote user @JonPKay.

My 4 year old figured out how to use twitter by using duct tape, a cat, and a hello kitty action figure.

It remains to be seen why Dorothy has been grounded so thoroughly from the internet—and if she was actually grounded. The Daily Dot reached out to the Twitter account for a comment and will update this story if we get a response.