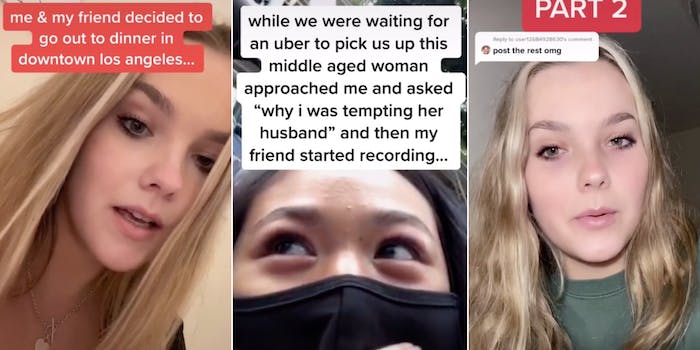 A TikToker got a crash course in Karen etiquette when a stranger in downtown Los Angeles slut-shamed her and accused her of trying to seduce her husband, while her friend filmed in disbelief.

TikTok user @cat.rino (who goes simply by Catherine) uploaded footage from the altercation on Sept. 11; it has since racked up more than 780,000 views. The video shows Catherine’s friend, Viv, recording her own reaction as another woman off-screen—this is Karen—berates Catherine for her outfit.

“Didn’t he tell you to stay the hell home? Didn’t he tell you to put on fucking clothes?” Karen says. “Do you know Indian women are the most desired in the world? Do you see me dressed like you? Fucking putting my ass in front of Spanish women, men. They don’t want you. Spanish men don’t fucking want you. Motherfucker, get dressed. I’m sick of you bitches. I don’t dress like that, bitch. Stop dressing like that, bitches.”

In a follow-up video posted Wednesday, Catherine offered some details about her confrontation with the wild Karen. She and Viv had gone to downtown Los Angeles to eat and go shopping, and they called an Uber to go home. While they were waiting for their ride, Karen approached them and asked, “Why are you tempting my husband?”

“Viv looked at her, and she goes, ‘No, not you. You’re innocent,’” Catherine said. She added that she was “definitely not [wearing] my most conservative outfit,” but “regardless of what I was wearing, the stuff she said to me was not justified.”

Catherine also said that Karen’s “husband” was nowhere to be found throughout this altercation. “Obviously it was clear that her husband had been disloyal in the past but that’s something she needed to take up with him,” she wrote in her second video. “She was projecting her issues onto me (I’m 18 she was probably 30s/40s).”

Catherine received an outpouring of support from other TikTokers, many of whom agreed that Karen was projecting her insecurities onto her and affirmed that she did nothing wrong. Thankfully, she and Viv made it out of the altercation unscathed—and they got a viral Karen video out of it.