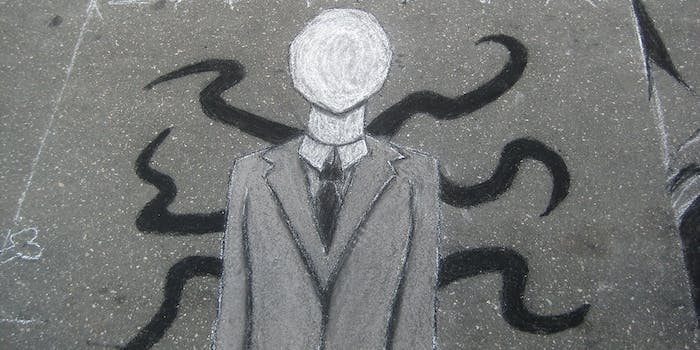 The girls claim that they stabbed their friend as an offering to Slender Man.

Two 12-year-old girls from Waukesha, WIS, have reportedly stabbed their friend as an apparent offering to the fictional Internet character ‘Slender Man.’ They were both charged with first-degree attempted homicide on Monday, and face up to 65 years in prison.

The two girls discovered Slender Man online at Creepypasta.com, a website that collects horror memes and “creepy” Internet legends. The girls believed Slender Man was “watching” their families and asked them to kill someone. They believed that if they did, he would spare their family and take them to his mansion.

Slender Man is a fictional character that originated from a Something Awful thread in 2009. He is depicted as being extraordinarily tall and having long arms and legs. According to his fictional backstory, the character gruesomely kills his victims by impaling them on trees or driving them to madness by stalking them. The popularity of the character has resulted in multiple video games and a number of Blair Witch-style documentaries.

In an attempt to please Slender Man, the girls reportedly began organising in December a plan to kill their friend, eventually picking the day after her birthday party to attempt her murder.

The day after the party, the girls took the victim to a local park to play a game of hide-and-seek. One girl instructed to other to “Go ballistic, go crazy,” and she allegedly began assaulting the victim. The victim was stabbed 19 times, before the girls reportedly told her that they would go and get help.

The girls apparently believed that Slender Man would then appear before them and take them to his mansion in the Nicolet National Forest in northern Wisconsin.

Instead, the stabbed girl crawled out of the woods and was found by a cyclist. She was taken to a nearby hospital, where she is now in stable condition, as reported yesterday, though one knife missed her heart by a “millimeter.”

The two girls were found and arrested several hours later, one with a 5-inch knife in her backpack as well as photos of her family, so she wouldn’t “forget” them at Slender Man’s mansion. They are currently being tried in Waukesha County Circuit Court as adults, with a possibility of up to 65 years in prison. The girls’ attorney is expected to “reverse waive” them into juvenile court, where the maximum sentence would be 13 years.

Waukesha Police Chief Russell Jack said of the crimes “It’s extremely disturbing as a parent and as chief of police,” and that it was “unbelievable.” The families of the suspects, who are due back in court on June 11, are said to be devastated by the charges.