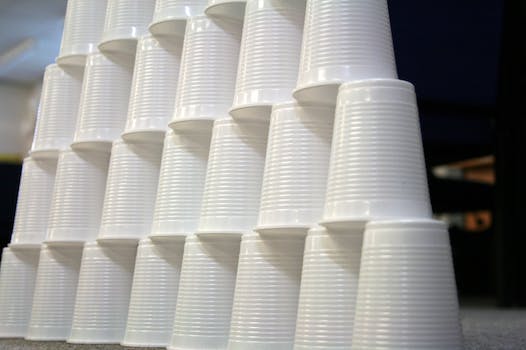 Truly, this is a piece of modern art.

Getting drunk around your friends and being the first one to pass out rarely if ever works in your favor.

You might wake up with an eyebrow (or two) missing; with your face covered in makeup; or, in the case of one man, as a part of one of the most creative and intricate pranks in recent history.

Upon seeing their friend passed out on the table, the pranksters built a large pyramid out of plastic cups around him, even placing some on the poor guy’s back. Ultimately, the guys ended up creating a cup mountain 17 rows tall, which even included a few rolls of toilet paper. Unfortunately, there’s no post-prank GIF or video of the guy waking up to the cacophony of falling cups, but this picture alone is still great.

The best part of all of this—aside from imagining how the prank came to be—might be the Reddit post where the picture originated. The comments section devolves into a thread about incest, references to Courage The Cowardly Dog, and some brave souls actually taking the time to count how many cups were used in the prank (answers include 209, 208, 184, and 182, meaning that this prank could also double as a counting test).