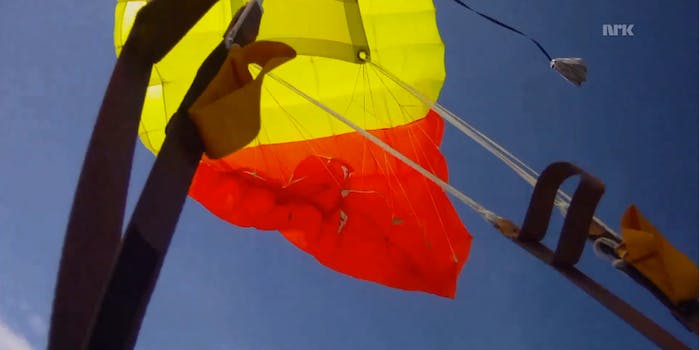 Skydiver barely escapes being annihilated by a meteorite

He didn't even know what he captured until he saw the footage later on.

There’s already enough to worry about when you’re skydiving without adding meteorites to the mix.

Yet that’s exactly what Anders Helstrup got when he and several members of Oslo Parachute Club jumped out of a plane in Hedmark, Norway in 2012. Helstrup had two cameras strapped to him when he took the jump. Of course, it can be pretty intense up there, so he didn’t fully register what he missed until after he landed and could review his footage.

Little did he know that he was just feet away from getting hit by a meteorite.

Helstrup recruited friends and family to help him search for the object and eventually got the Natural History Museum in Oslo involved.

There are plenty of skeptics, Helstrup included, who don’t think a meteorite actually flew past him, but after experts examined the stone he brought to them, they’re convinced that it’s the real thing. According to geologist Hans Amundsen, it may be the first time a meteorite has been filmed during its descent to the earth.