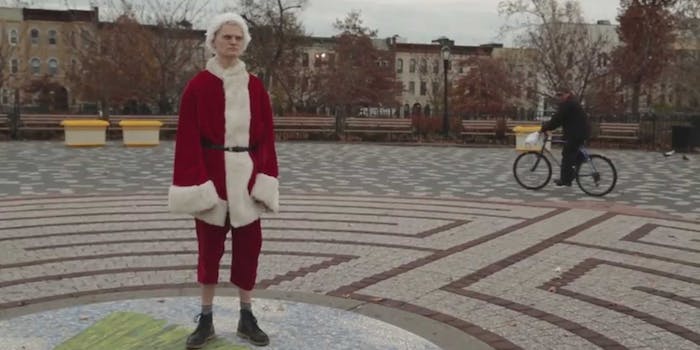 What if Santa gave himself Weight Watchers for Christmas?

The holidays often turn into seemingly endless dessert marathons, but while us ordinary humans are packing on the winter weight, Santa might be getting a head start on his New Year’s workout routine.

The result of this hypothetical? Terrifyingly LOL.

David Craig and Lily Du, the funny twosome behind that Love Actually spoof, have recast Santa as a svelte, sharp-jawed version of his normally jolly self. The video opens on Craig as Santa exhibiting his newly slim physique with all the glee of Subway’s newest spokesperson. The pedestrians Santa encounters, however, are nowhere near as pleased with his new look.

As Santa goes for a stroll in the park to spread holiday cheer, hipsters taunt him, children edge away from him, and even those who embrace him are wary of his strange new look.

“Even your hands are thin,” remarks comedian Jo Firestone, who reluctantly perches on Skinny Santa’s lap. “You look like some kind of winter skeleton.”