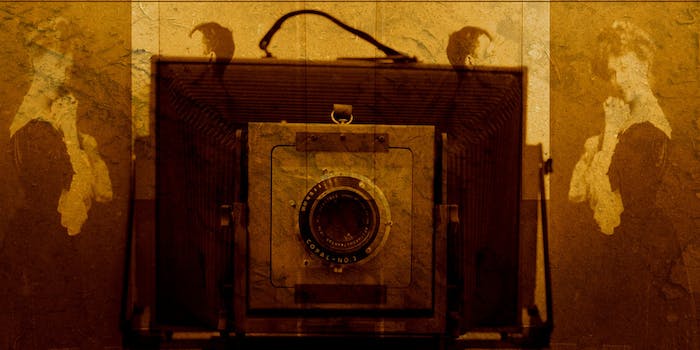 A new app shaves 5, 10, or 15 pounds off your selfies so you can better meet society’s expectations.

Because popular media dictates that maintaining a slim figure is synonymous with proving your worth as a human being, enter SkinneePix: a new app that shaves 5, 10, or 15 pounds off your selfies so you can better meet society’s expectations and internalize your shame.

“SkinneePix makes your photos look good and helps you feel good. It’s not complicated. No one needs to know. It’s our little secret,” the app’s description reads.

Ah, yet another blatant reinforcement of the notion that skinny is “good,” being slim is the key to happiness and “Have you lost weight?” is the golden compliment to which we should all strive. Who cares if you’re lying to yourself and others by digitally altering your photos? Achieving thinness, even by artificial means, is what matters most.

Unsurprisingly, the tech startup behind SkinneePix, Pretty Smart Women, has the body-shaming as “motivation” spiel down pat. And rightly so, because with an asking price of $0.99 per download, they need your low self-esteem to make a profit.

According to co-creators Susan Green and Robin J. Phillips, the idea for SkinneePix came about during a recent vacation with friends, which apparently involved taking lots of selfies and fuming in self-hatred.

“All we heard people say was ‘Delete that, don’t you dare tag me in that, this is horrible.’ Green told the Huffington Post, “After the last vacation, we were like, we can do something about this.”

Now, I believe that the selfie can be an empowering form of self expression, particularly for marginalized groups taking back control of their own image and finding community in the images of others. I also don’t think there’s anything wrong with wanting to look your best in a photo, or with using Instagram filters to achieve that end.

But when it comes to drastically changing the way we look, where do we draw the line?

Should we be more bothered by the fact that Target is photoshopping their models, or that we are increasingly photoshopping ourselves?

Granted, even I have not been immune to this epidemic. I have brightened, cropped, strategically angled and Instagram filtered many photos of myself. I’ve also wasted a lot of time praying for my too-large head to shrink, and for my stupid, boring face to grow striking high cheekbones like Keira Knightley’s.

Some days, these thoughts will pop up and scare me; but I’m learning to let them go, to make peace with my lollipop head and apple cheeks that others find so adorable.

And while I’ll also be the first to acknowledge my thin privilege (or curse, depending on your frame of mind), I believe that the selling point of SkinneePix—look “better” in photos by making yourself look thinner—is an infuriating and disturbing message to instill in any person, regardless of height, weight, age, ethnicity, gender, orientation, body size or shape.

Here’s the thing, though: You don’t have to buy into it.

You don’t have to compare yourself to photoshopped teen Tumblr demi-gods and celebrities on Instagram who also have personal stylists, trainers, nutritionists, makeup artists and professional airbrushers that most of us mere mortals can’t afford.

You don’t have to stress over how “likeable” your photos are, or worry that your visual market value will decrease the second you expose an extra pound; or, heaven forbid, have the audacity to take up space and say, “Here I am. This is me. I don’t care what you think.”

And you certainly don’t have to give credence all of the thin-worship bullshit by manipulating your own image on SkinneePix or any other self-slimming app, chasing unrealistic beauty standards just to prove that yes, you have self-discipline; you know how to placate and conform and make yourself small.

Because that is the message being sold to us, burned into our psyches through social media and The Biggest Loser and magazine covers whose Photoshopping we first decry and then slowly, secretly begin to accept as the golden paradigm. Master the art of denying yourself, hide behind a filter, starve and sweat and shrink yourself in photos to achieve a skinny person nirvana, a promise of happiness that does not exist.

SkinneePix and a wave of other “skinny selfie” apps are literally making money off of our insecurities. Who says that we have to let them win?

Photo via wolfgangphoto/Flickr (CC BY 2.0)