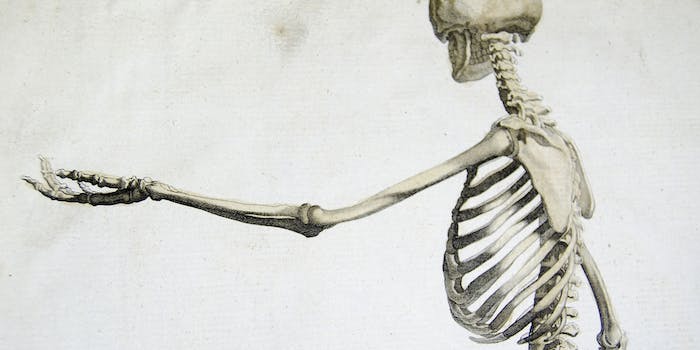 It's not even Halloween yet!

I’m the type of person who has been kicked out of a Macy’s during the holiday season because I couldn’t handle myself around the multi-tiered display of dancing Santas and had to press the button on every single one to produce a cacophonous blend of “ho ho hos” and horror, each Father Christmas moving and jerking like something half-robot, half-puppet. Skeletontunes feels just like that to a certain extent, except there’s no brick-and-mortar establishment for me to get banned from.

From then on, the clip has remained the same: a small skeleton puppet wailing on a microphone before lifting his right knee to the heavens, doing the monkey, and backing that ass up.

The song, however, is whatever you want it to be.

Skeletontunes has helped me discover the Top 40 music I didn’t know I needed in my life, like Shawn Mendes’ “Stitches” and Halsey’s “Gasoline.” In watching all 70 Skeletontunes videos, I found some favorites that scream out like beacons of hope in the sad-sack abyss of Twitter. While other repetitive accounts are fucking with my caffeine addiction or are literally just a siren warning Twitter of San Francisco’s impending doom when that city is already a dumpster fire, Skeletontunes soothes the soul.

worth it – fifth harmony pic.twitter.com/tyCIbZR7kb

There is no rhyme or reason to the posting schedule, and Skeletontunes has stayed mum since October 16, when the daily offerings featured washed-up Disney dork and possible French culinary delight Corbin Bleu, One Direction, and Oasis’ “Wonderwall,” which is as old a track as you can get in the land of memespeak. So anyway, here’s “Wonderwall.”

Is it over? Skeletontunes’ bio only says to “DM to request a song!” It’s our duty as citizens of the internet to bombard the fun-loving entertainer with pleas of “Careless Whisper” and “Yakety Sax” like our lives depend on it.

Seriously. I’ve been in a haze since the bleating wails of Liam Gallagher got set to Skeletontunes. Please don’t lay your weary bones to rest just yet.