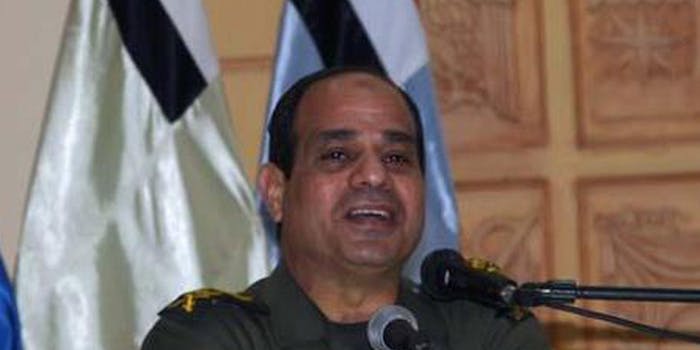 Gen. Abdul Fattah al-Sisi used Facebook Tuesday to warn the country of total collapse without more intervention from him.

As Egypt enters its fifth day of rioting and protests, the head of the country’s military, Gen. Abdul Fattah al-Sisi, used Facebook Tuesday to warn the country of total collapse without more intervention from him.

“The continuing clash among the various political forces may lead to the collapse of the state and threaten the future of our coming generations,” he said.

His statements came in the wake of declaring a state of emergency against protesters in cities along the Suez Canal, a move “aimed at protecting vital and strategic goals of the State,” he said.

Sisi stressed that it was becoming increasingly difficult to stop protesters while respecting their “right to demonstrate.” Over 50 people have reportedly already been killed in the protests.

Protesters are angry with Mohammed Morsi, who in June became the country’s first-ever democratically-elected president. In the months since he took office, though, he’s granted himself dramatically stronger presidential powers.

Though the Egyptian Armed Forces Facebook page has almost 100,000 likes, only a few hundred shared Sisi’s message. Many commenters didn’t take kindly to what Sisi had to say.