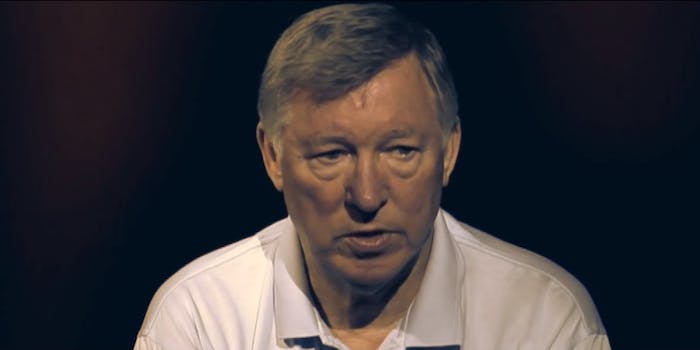 One of the most successful managers in soccer history, Sir Alex Ferguson, announced Wednesday that he is to retire this summer. Predictably, Twitter exploded.

One of the most successful managers in soccer history, Sir Alex Ferguson, announced Wednesday that he is to retire this summer. Predictably, Twitter went bananas.

The Manchester United boss, 71, has brought 13 Premier League titles, two Champions League trophies, and many other cups to Old Trafford over the last 26 years. He broke thousands of fans hearts when he made the announcement than he was stepping down to become a director and ambassador for the team. One chap was even sent home from work after the “devastating” news.

Manchester United’s press office shared the news on Twitter with about as dry and boring a tweet as you could imagine.

Twitter said in a blog post there were more than 1.4 million mentions of the story on Twitter within an hour. It added that the news accounted for eight for the top ten trending topics in the U.K. for a time, and four of the worldwide trends. #ThankYouSirAlex was the top worldwide trend within eight minutes of the press office’s tweet.

As of 9.30am ET, #thankyousiralex, Fergie (his nickname), and Man Utd were all trending on Twitter worldwide. Everton was also trending at that time, presumably because that team’s manager, David Moyes (also trending earlier), is heavily rumored to be taking over from Ferguson.

However, some Twitter users were confused (or just trolling). They perhaps forgot how mentions work or even thought that the curmudgeonly Ferguson had in fact allowed hell to freeze over and joined Twitter himself. They lamented the retirement of @fergie, who, of course, is a singer with the Black Eyed Peas and not a soccer manager.

Devastated about the Fergie news. I mean, I just don’t think the Black Eyed Peas can carry on without her. #sadday

Thanks for everything @fergie You will be missed! #thankyousiralex

@fergie, the most successful manager. Big shoes to fill.

Big up @fergie what a legendary career, the best ever going out on top.

Ferguson will soon pack up his manager’s office. If he doesn’t move everything into his new director’s office, he’ll have to drive it home. We have to wonder what he’s gonna do with all that junk in his trunk.

H/T The Guardian | Photo via TDTRHD/YouTube