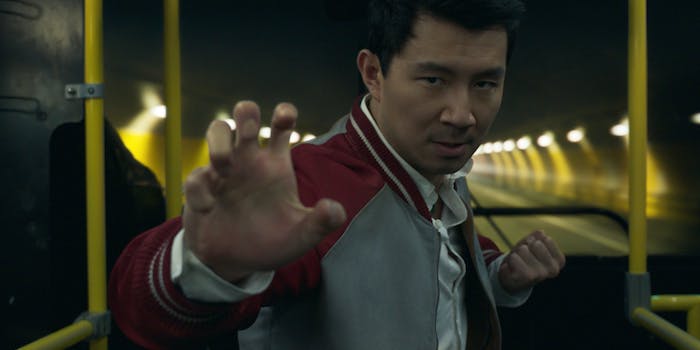 The account was deleted, but screenshots and an archive remain.

Screenshots from an old Reddit account purported to belong to Shang-Chi and the Legend of the Ten Rings star Simu Liu have gone viral after resurfacing on Twitter.

The Reddit account that’s being tied to Liu, u/nippedinthebud, is no longer online. But screenshots tied to the account were posted on Twitter Thursday night with screenshots from r/aznidentity, a subreddit that has shared anti-Black sentiments in the past and has been linked to Men’s Rights Asians, a group often known for harassing outspoken Asian women.

“/u/nippedinthebud appears to be Simu Liu’s archived Reddit account,” @NebsGoodTakes wrote. “It shows him commenting in the racist incel subreddit called into question (among other things).”

Another thread featuring screenshots from u/nippedinthebud’s Reddit post history, including comments where he appears to be sympathetic toward pedophiles in 2015 in the context of discussing research he did for a role he played, noted that “From a biological standpoint it’s no different than being gay.”

The posts also include comments about girls’ ability to play sports and some thoughts on terrorists.

Several prominent Asian critics have also called out Liu for his reported link to r/aznidentity.

“For those asking for receipts, you won’t find any,” Edward Hong wrote. “All Reddit board and Twitter conversations have been scrubbed clean with specific MRA involvement. You can only go by the experiences of the API women who have been affected by Simu and more precisely his followers.”

Two separate archives of u/nippedinthebud (one from 2014, the other from 2017) appear to confirm that the account did belong to Liu.

Among the posts in the 2014 capture is a r/aww post of a dog photoshoot titled “My girlfriend, two dogs and I did a photo session together. This is what happened.” One of the photos, which were uploaded to the photo-sharing site Imgur, includes Liu. The most recent post in the 2017 profile capture is a text post on r/KimsConvenience (the subreddit for the Canadian sitcom that introduced many people to Liu before he starred in Shang-Chi) where he thanks fans for their support; the post, titled “Just Wanted To Say Thanks,” is signed “Simu.”

Hey everyone, what a small but amazing little community here! Just wanted to say thank you so much for tuning in and for being a part of our show. I’m confident that we’ll get more users as the show goes on. And believe me, it will go on.

Cheers and looking forward to hearing from you guys more,

Although u/nippedinthebud has been deleted on Reddit, you can still view an archive of all of u/nippedinthebud’s posts between 2013 and 2019 through a GitHub repo tool that can archive Reddit posts even from deleted accounts. Many of the posts made by u/nippedinthebud published within that span of time further identify the user as Liu.

The majority of the posts are in the NBA subreddit, and in later years, he often posted to the Kim’s Convenience subreddit to interact with fans. The account’s final comment—a reaction toward a video of President Moon Jae-in being presented with a Kim’s Convenience shirt at the G20 Summit—was posted to r/KimsConvenience on July 8, 2019. It was 12 days before Marvel would introduce Liu as Shang-Chi to thousands of fans in San Diego Comic-Con’s Hall H (and to millions of fans online around the world).

While many people were outraged by Liu’s posts, particularly those surrounding pedophilia, others argued that those eviscerating Liu for years-old posts are taking the comments out of context.

Liu posted frequently in r/AskReddit (he has 59 responses). His comment about girls not being “as good as boys at sports,” is in response to a r/AskReddit thread titled, “What are some ‘asshole’ things that you say or do on a regular basis?”, seemingly an acknowledgment that even though it’s something he believes, he knows it’s wrong.

Another response in which Liu wrote “Think it’s OK to strap a bomb to themselves and walk into a school. Kill mothers and attempt to brainwash their children to fight as soldiers. Think that women shouldn’t be allowed to show their faces in public” is in response to the question, “What is something people do that makes you instantly despise them?”

While he did make four comments on r/aznidentity, they were in response to news about Kim’s Convenience and at least one poster’s initial wariness toward the show. In those comments, he revealed that his character would have a romantic arc and tried to assure people about the positives of a show centered around a Korean Canadian family. (One of the comments was deleted from the thread but was archived.)

Liu’s comments about pedophiles and what he found in the context of researching for a role are in response to a r/worldnews post linking to a 2015 BBC article detailing a German program designed for people who identify as pedophiles and wanted to stop.

At one point, Liu, who revealed that he was an actor in Canada, offered his thoughts on what he found in his research and linked multiple times to an article profiling a teen who was trying to help pedophiles who didn’t want to act on those urges. In his initial comment, he tries to equate treatment options for pedophiles to how people used to widely believe that conversion therapy would cure someone of being gay; even people who are defending Liu note that it’s not the most well-worded response on an incredibly sensitive topic.

“As a part of my research I discovered that these people have literally nowhere to turn, even non-offending pedophiles,” he noted. “They cannot seek treatment in most parts of the word [sic] because the therapist or psychiatrist would be legally required to report any individuals they suspected would pose a threat to minors.”

“I just figured I needed to make myself completely clear – saying ‘I did a tonne of research for this pedophile character I had to play’ without contextualizing could be disastrous,” he wrote in response to someone laughing at his disclaimer.

Liu has yet to directly respond to the thread. His Twitter account liked several tweets from someone who contextualized his previous Reddit posts and his resurfaced April 2019 tweet in which he states that he doesn’t “ever EVER advocate for anything other than positivity.” At the time (a few months before u/nippedinthebud would post its final comment), he also noted that it was possible that his older comments would one day resurface.

“​​DISCLAIMER: If you dig back far enough, I’m sure you’ll find a more immature version of me who gave in to anger and hate,” he replied to that initial tweet. “It doesn’t make me a hypocrite; it makes me a human being. Mentalities evolve. We shift and we grow. And I want us all to grow the right way.”

He now added a comment noting, “Oh cool this is here.” In response to a now-deleted reply to that comment, Liu added, “Twitter is a slanderous place sometimes, and it feels good to shut down trolls and bad faith actors who want to drag your name through the mud.”

The Daily Dot has reached out to Liu’s reps for comment.