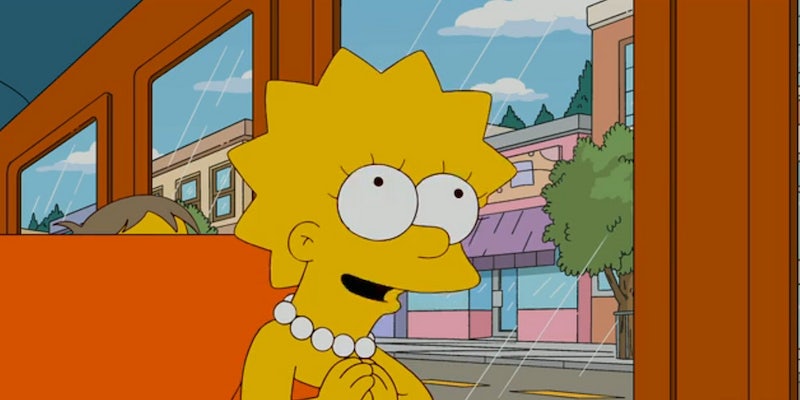 The best show of the 20th century is helping change television in the 21st.

Even if you hate television, comedy, and pop culture in general, you’re probably still at least somewhat aware of who America’s favorite yellow family is. But in case, by some miracle, you aren’t, you’ll have ample time to catch up with them when the new Simpsons World app launches in October. Not to oversell it, but the news has inspired phrases like “the future of TV.”

Introduced Monday at the Television Critics Association press tour, Simpsons World comes on the heels of burgeoning network FXX’s massive syndication deal to acquire the cable and VOD rights of The Simpsons for $750 million. Although other networks were interested, 21st Century Fox made the decision to keep the show under their tentpole, while also finding a way to announce FXX, an offshoot of fellow Fox subsidiary, FX, as a major player.

But the real news here is Simpsons World. Viewers will be able to access Simpsons World, assuming that their cable bundle includes the FX family (FX, FXX, and FXM, which stands for FX Movie Channel), as a website or as a streaming service via television platform, ala the Netflix, Amazon Prime, Hulu Plus, and HBO Go apps. Moreover, Simpsons World will include innovative features such as playlists, episode, and script guides, the ability to (legally) pull clips for your own use, as well as theme, quote, and keyword searches (in case you only want to watch episodes with Hans Moleman, for instance).

And if that’s not enough Simpsons for you, FXX will run a marathon of the entire series from Aug. 21 to Sept. 1, in an apparent attempt to upend all of civilization.

It’s no secret that this announcement is only the latest in a long line of The Simpsons’ many great cultural achievements. This was the show that helped make Fox into a major network and went head to head with President George Bush, Sr. after all. Since then, Time magazine TV critic James Poniewozik crowned The Simpsons the show of the century, while Entertainment Weekly has named it the second greatest show ever (in addition to crowning Homer as the greatest character in pop culture from the last 20 years).

TV Guide also named it their 10th best show ever, while the Writers Guild of America has named it as the eleventh, and England’s Empire magazine has also heralded it the “Best. Show. Ever.” Of course, The Simpsons has also won a plethora of awards, even if it has failed to take home major prizes in comedy, most likely because of its animated format.

Make no mistake though, Simpsons World is a big deal. It’s a big deal for The Simpsons, it’s a big deal for television, and it’s a big deal in terms of what it means to create a cultural universe in 2014. In reviewing the news of Simpsons World for Time, Poniewozik recently noted, “The Simpsons, as producer Al Jean pointed out at yesterday’s presentation, predates social media (and it debuted on Fox the same year Tim Berners-Lee proposed the World Wide Web), but it was creating a virtual world even then. Now that world is inviting our world in.”

The elephant in the room, with all this news, is that Simpsons World is arriving at a rather strange time in Simpsons history. It’s a widely accepted notion that the show is not exactly going through a golden age. It didn’t even manage to garner a nod for Outstanding Animated Program among this year’s Emmy nominees.

Trying to pinpoint where the decline of The Simpsons actually began is tricky, but the feeling that the best days of the show are behind it is unmistakable. Placing much of the hefty burden on incessant celebrity guest stars, Salon’s Daniel D’Addario suggested that Simpsons World will give true devotees a chance to focus on the show’s more traditional family-related episodes. D’Addario claimed, “Those watching The Simpsons on an app in the future are probably die-hard enough fans to want a few more episodes that drill down on the family’s relationships…rather than fleeting interactions with one-and-done new friends.”

The parade of celebrity guests and other issues aside, however, The Simpsons has never fully lost its luster. New rumors that the show may kill off the beloved Krusty the Clown next year are likely going to create enough of a spark of interest to get at least a few fans to return for the show’s 26th season. (Marcia Wallace’s death also brought forth an outpouring of feeling last year, as it signified the departure of Mrs. Krabappel.) Although in a sense, one could argue that Family Guy sort of beat The Simpsons to the punch on the whole “getting rid of a major character” thing, when it killed Brian off in the most recent season only to bring him back several episodes later (never mind that Maude Flanders’ untimely demise proceeded all of this hubbub).

Speaking of Family Guy, a crossover episode involving the Griffins meeting the Simpsons is also set for next year, with the titular character from Bob’s Burgers set to make an appearance too. And if you’d rather stick with the Groening family of animated shows, a crossover between The Simpsons and Futurama is supposedly in the works as well.

As tempting as it is to look at this news as a sign that The Simpsons is set to experience an upswing in creativity again, the fact is that Simpsons World is just as important from a business standpoint as it is from an artistic one.

Despite the Aero decision from last month, Internet TV remains a growing force. If anything, the rise of the Internet has only increased consumers’ demand for content. And for long-running shows like The Simpsons, the backlog of episodes means big money. FXX’s deal for the show’s streaming rights extends ten years, but when that time is up, don’t be surprised if another bidding war ensues. The Simpsons has proven, if anything, that it has staying power. And if other properties like it can cut a similar deal, then why wouldn’t they? Perhaps the Seinfeld app is next.

The other business model which the Simpsons World deal could reenergize is that of syndication. Although the current system has run into struggles as of late, in a world where FXX pays shy of a billion dollars to acquire the rights to one show, the practice of syndication is clearly far from dead. However, with streaming on the rise, the Simpsons World deal also creates a scenario wherein consumers and content providers get the best of both worlds. FXX is still able to run old Simpsons episodes with ads, while big Simpsons fans get to access their favorite episodes whenever they want. In essence, it signifies a time where streaming rights and syndication rights may become one in the same, basically making things simpler for everybody.

But none of this really gets to the heart of the Simpsons World deal, which is the increasingly symbiotic relationship between the Internet and fandom. The Simpsons is almost an anomaly in this case, because it generated the same kind of unstoppable love present in Internet fandom, before there even was an Internet, so to speak. This was a show that inspired devotion. The kind of show that people write whole books about. Prior to the minutia-combing television recaps that are everywhere on the Internet today, this show begged you to pour over that same minutiae on your own (consider all those sign gags or the hidden McBain movie, for instance.)

The Internet has just continued the same Simpsons fandom that was already there. Furthermore, if that spirit of pre-Internet fandom for The Simpsons didn’t exist, it’s unlikely the show would still be on, much less as talked about as it continues to be today. This is because The Simpsons is ultimately an exercise in world-building. It invites you to come back again and again and again, promising more commentary, more adventures, more depth from this funny yellow family and the other people in their town. The Simpsons defining quality and its fatal flaw may be that it never stops expanding.

Now, the possibilities for other shows with similarly complex universes are up for discussion too. As Time’s James Poniewozik puts it, “The venture suggests a new kind of future for TV, or at least for certain kinds of entertainments and franchises: one in which truly immersive TV is not just a show but an app, a platform, a medium. TV shows used to be on channels; now something like The Simpsons can be a channel.”

Poniewozik concludes this Simpsons lovefest musing, “I still say The Simpsons was the greatest TV show of the 20th century. It would be something if it helped redefine what TV shows are going to be in the 21st century.”

With all due respect to Mr. Poniewozik, assuming Simpsons World is successful, then it already has. Because this is The Simpsons we’re talking about here. For them to be anything but revolutionary, would be “unpossible.”