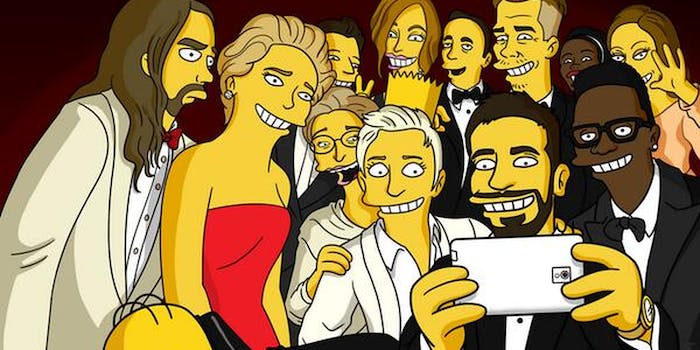 Bart and Homer elbow their way in to a historic shot

All your favorite celebrities, Simpsonized.

It only took two days for The Simpsons to take on the world’s most famous selfie.

The original photo that Ellen DeGeneres took during the Oscars now has over 3.2 million retweets and crashed Twitter during the ceremony, and now Simpsons creator Matt Groening created his own version of popular shot.

The Simpsonized version was posted to Homer Simpson’s official Twitter account, and while it hasn’t gotten the reach of the original photo, Groening nailed Kevin Spacey’s expression.

As it turns out, Liza Minnelli wasn’t the only one left out of the picture—and things got pretty ugly for Homer and Bart.

The ugly true story of that Oscar® selfie can finally be told! Let’s break Twitter again. Look for Bart. pic.twitter.com/tdfr3Juhff

If Homer’s usual treatment of Bart is any indication, Bradley Cooper better watch out.

Oscar winner Jared Leto, who was mostly cropped out of the original photo, was positively thrilled by the new take.

The Oscar selfie has turned into its own meme, having been parodied by LEGO and the Turkish national soccer team and Photoshopped with Spacey and DeGeneres’s face on everyone, among others.