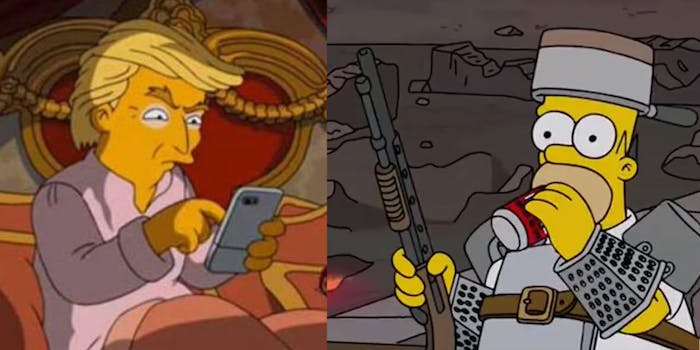 People are pointing to a 1996 episode that depicts a riot with characters entering the Capitol with bombs and guns.

After pro-Trump rioters stormed the U.S. Capitol on Wednesday, fans of The Simpsons are once again convinced the show’s makers predicted the future.

A 1996 episode, “The Day the Violence Died,” depicts a riot with characters entering the Capitol with bombs and guns.

In the episode, Krusty the Clown presents “I’m an Amendment to Be,” depicting a constitutional amendment’s attempt to ban flag burning. The episode was a parody of the Schoolhouse Rock song “I’m Just a Bill.”

Twitter users are also convinced the show foresaw Trump’s Twitter ban. In a still of a different episode, the cartoon Trump is sitting in bed while using his cellphone. The still comes from a 2017 episode that pokes fun at Trump’s first 100 days in office. “A hundred days in office, so many accomplishments,” Trump says. One of those accomplishments is that his Twitter following grew by 700.

So while it is not exactly a correct “prediction” of Trump’s Twitter ban, the 31-year-old animated TV series has previously been credited with accurately predicting the future.

This had led people to point to another episode that features the date “JANUARY 20th, 2021,” the same date of President-elect Joe Biden’s inauguration. In a screenshot from the episode, an armed and armored Homer sits atop a roof as the world burns around him.

In the episode—which aired on Nov. 1—Homer falls asleep and misses his chance to vote. The town then appears on Inauguration Day in ruins. The Four Horsemen of the Apocalypse appear, bearing flags reading “pestilence,” “famine,” “war” and “Treehouse of Horror XXXI.”