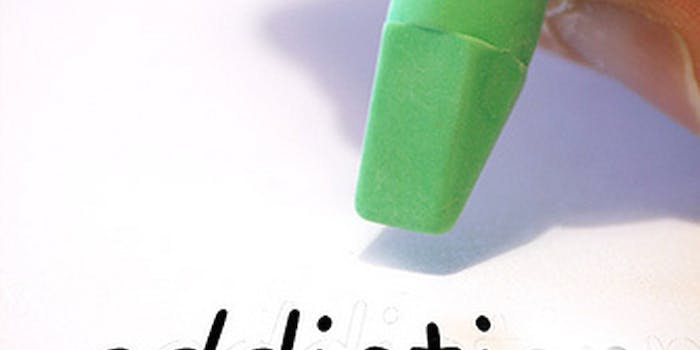 Addicted to Reddit? This quick trick can save you from yourself.

Reddit addiction may not be an official disorder according to the American Psychiatric Association, but users of the social news site know it’s all too real.

There are literally hundreds of user posts about the topic on the site. Some are clearly jokes, but others are serious pleas for help.

Now, those dry-eyed, sleep-deprived, meme-overdosed redditors may have a antidote: One Widnows-savvy redditor has developed a code for blocking the site altogether.

Redditor JDD87 posted the code in a thread in the AskReddit subreddit. The solution, it turns out, is simple.

Copy and paste his code into a text editor. Then, save it  with the extension “.bat” — a Windows “batch” script, the solution only works in Microsoft Windows.

The script still let’s you indulge your addiction, just in short, manageable chunks. Once you’ve installed it, open that same .bat file to launch a window that will give you ten minute access to Reddit. This only works three times a day, however.

JDD87’s post was in reply to redditor who put out a public request to be banned from the site.

That’s actually not an uncommon request. According to Erik Martin, the site’s general mananger told us last month, admins often receive similar requests from students in the middle of exams.

“Can an admin IP ban me for a couple days?” that redditor asked in the title of his post. “I have stuff to do.”