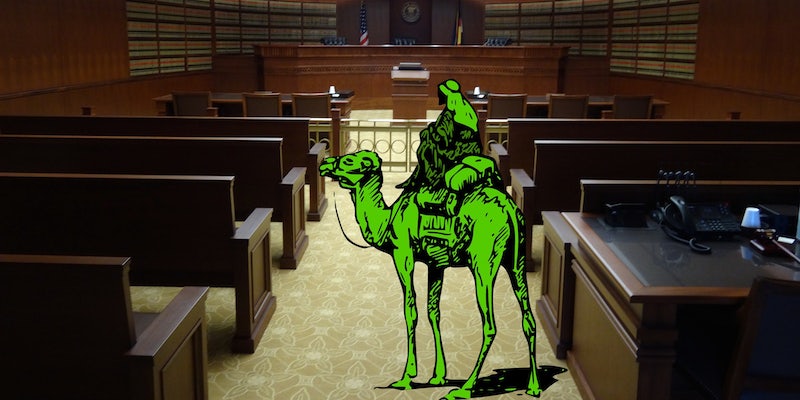 The judge likened Dread Pirate Roberts to a digital "Godfather," determining the territory.

A federal judge has shut down alleged Silk Road owner Ross Ulbricht’s attempt to escape legal trouble without a trial.

Judge Katherine B. Forrest denied Ulbricht’s motion to dismiss the indictment against him in a 51-page decision released Wednesday. Ulbricht, 30, is facing potential life in prison for narcotics and computer hacking conspiracy charges, money laundering, and being the kingpin of a continuing criminal enterprise.

Ulbricht’s defense had two main arguments in their motion to dismiss the indictment. The first was that even if Ulbricht did run the online drug empire Silk Road using the name “Dread Pirate Roberts” as alleged, he still would not have sold any drugs. Joshua Dratel, Ulbricht’s lawyer, said that his client would have merely been a “digital landlord,” who is not responsible for the actions of his tenants.

Forrest shot down with the digital landlord argument. She wrote that Dread Pirate Roberts acted more like a digital “Godfather” responsible for “determining the territory, the actions which may be undertaken, and the commissions he will retain; disciplining others to stay in line; and generally casting himself as a leader – and not a service provider.”

Forrest also didn’t buy the argument that Bitcoin can’t be used to launder money, the second main point from Ulbricht’s defense. To Forrest, since Bitcoin is a “medium of exchange,” it should be regulated similar to other currencies.

“The money laundering statute is broad enough to encompass use of Bitcoins in financial transactions,” Forrest wrote. “Any other reading would—in light of Bitcoins’ sole raison d’etre—be nonsensical.”

Ulbricht’s defense also presented a significant number of smaller arguments, to the point that Forrest referred to them as “kitchen sink arguments.”

Dratel was likely probing for legal softspots because of the unprecedented nature of the case. There has never been an illicit ecommerce site nearly as successful as Silk Road.

Ulbricht is accused of reaping tens of millions of dollars in commissions. The U.S. government says it is in possession of 144,000 bitcoins seized from the harddrive of Ulbricht’s laptop. Those bitcoins were worth around $18 million at the time the FBI shut down Silk Road last October, and it’s worth about $90 million at today’s exchange rates.

Forrest agreed that the case is unprecedented, referring to it as “a case of first impression,” but she was unequivocal in her belief that the “alleged conduct constitutes cognizable crimes.”

The case is scheduled to go to trial on Nov. 3. Judge Forrest’s full 51-page decision is copied below.