Inside the sick pedophile ring that blackmailed girls like Amanda Todd

Amanda Todd was just one of many kids harassed and tortured by a cadre of pedophiles and creeps who make games out of sexual abuse online.

Warning: This story contains descriptions of child pornography and may be upsetting to some readers.

There are still few answers in the case of Amanda Todd, the Canadian teenager who committed suicide Oct. 10 after years of harassment and sexual blackmail. But one thing is clear: Her tale of online abuse was hardly an isolated incident.

Todd was just one of many kids harassed and tortured by a cadre of pedophiles and creeps who lurk in the Internet’s underbelly and make games out of sexual abuse.

Earlier this week, Anonymous promised it had broken the case wide open after digging into Todd’s online footprint and, using online screen names and public records, linked her to 19-year-old Dakota (“Kody”) Maxson from Vancouver, Canada.

But Canadian police have since cleared Maxson and called the hacker group’s allegations “unfounded.”

“If I was a tormentor I’d be in police custody,” Maxson told the Vancouver Sun. “None of it’s true.”

He claimed he did indeed know Todd in a “sense,” and that she’d even come to him for help. He didn’t blackmail her, he said—but he knows who did, someone who went by the online handle “Viper.”

Two years ago, Todd was hanging out in a video chat room when she flashed her breasts for the camera. She was only 12. Someone had taken image of that moment, however, and a year later messaged her Facebook, threatening to release the picture to everyone she knew unless she gave in to his demands and “put on a show.” When she refused, the blackmailer made good on his promises, sending Todd in the downward spiral of depression that would ultimately end in her suicide on Oct. 10.

There’s something particularly disturbing about this type of behavior, because it combines both sexual abuse and the torment of blackmail—a threat of shame amongst family and friends that can shatter a fragile teenager’s sense of self-worth and identity.

The cappers’ name is derived from their preferred method of blackmailing: pressuring teens into exposing themselves online, surreptitiously screen capping an image, and then threatening to spread the pictures to the kids’ friends and family unless they reveal more. The cappers were highly active around the time Todd was blackmailed in 2010, and a fair amount of circumstantial evidence ties her case to the group.

So who are they? The group operated like a kind of parasitic fandom, stalking teenage girls who frequented video chat sites like BlogTV, Stickam, and TinyChat, goading and coercing them to strip, then taking to obscure Web forums to gloat and share the pictures. When a teen showed skin or did something else explicit for the camera, they called it a “win.”

The cappers’ digital footprint is surprisingly large for a group purveying in such highly illegal content. All told, it comprises dozens of episodes from a self-produced animated news show, as well as three issues of a digital magazine that chronicled their conquests.

The group’s August 2010 production provides perhaps the most shocking example of the explicit child pornography cappers encouraged and filmed.

What happens when a 13-year-old baby sitter goes on blogtv junior with an 11-year-old girl? They go to Ustream and end up having oral sex while 300 people watch. Because Tinychat mods have cracked down so much the last couple of weeks, it was hard to find a place where these kids could have sex where they wouldn’t get banned. They got banned on Ustream and soon were blackmailed by perso pete for deleting their account. If you want to know where you can get the video just message the person who blackmailed them, luvyashawty on YouTube. (That account has since been deleted.)

While the videos have received the most media attention, the group’s magazines provide a more candid look into this weird, exploitative world. Whoever designed the publication has a gift for the atrocious, both in terms of design and content. One section of the March to April 2010 issue, titled “Back Alley Babes: Prostitutes of Tomorrow,” includes dozens of images of scantily clad girls, as well as text blurbs gleefully describing the sex acts they’ve performed for their Web audience.

One, which accompanied an image of two teen girls who appear to be topless, read: 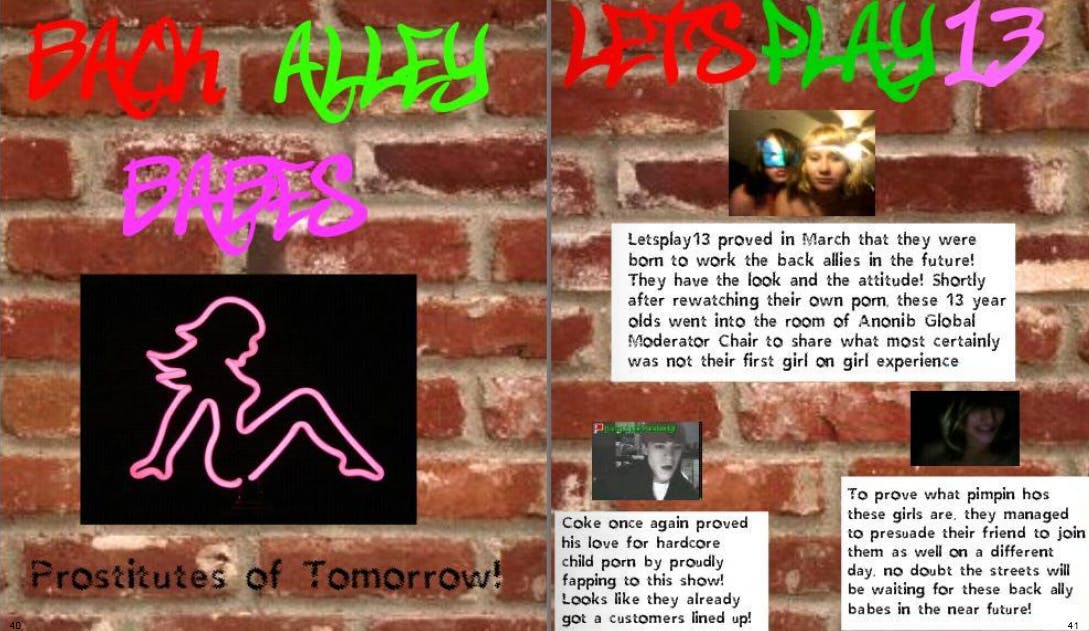 Another page from, same issue, called “highlight reel,” laid out four sets of female eyes in a kind of quiz format. The caption asked:

“You’ve fapped to their bodies but can you recognize these young girls just by looking into their eyes?” 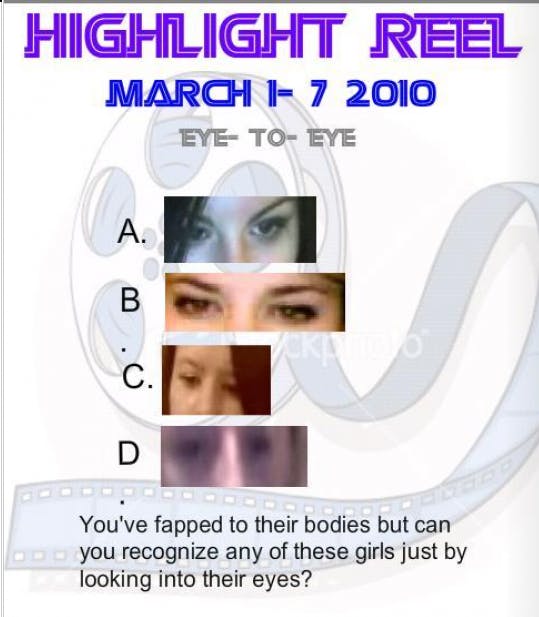 That’s just a sampling of the depravity you can find in the magazines. You can read them in their entirety here (but it’s not recommended).

As the Daily Dot reported Monday, Amanda Todd’s oblique connection to the group can be found in two videos, dating from Dec. 19 2010 and Dec. 10 2010. Importantly, the capper crowd didn’t seem to know Todd very well. The first video, which announced her appearance on the scene, calls her a “mystery girl” and wonders if the video might have been recorded and set on a loop.

Though Todd’s precise relationship to the group is unclear, her story bears parallels to other tales of blackmailing on the site.

A clip from the group’s magazine detailed the “one year anniversary” of the blackmailing of a girl named Lauren. “She has definitely come a long way since then and has not slowed down since!” the magazine reads reads. “Though one year later, Lauren still receives threats and harassment from users on Stickam.” 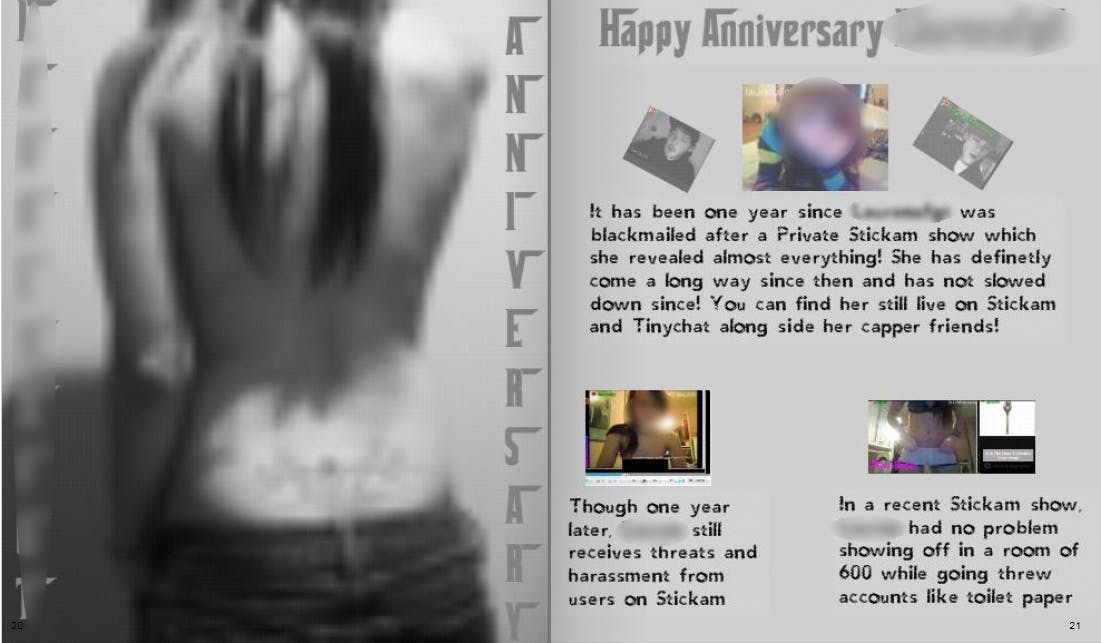 And while neither Viper nor Kody have direct connections to Todd, both are, crucially, accused (or in the twisted morals of the cappers, lauded) of blackmailing other girls. In one Daily Capper video, a 14-year-old girl named Peyton directly accuses Maxson of sexual extortion.

Narrator: Peyton claims she is free of her blackmailers’ clutches. She went on BlogTV to share her story of how Kody blackmailed her. She even got her mom to cuss him out …

A month ago he recorded me for the first time, and then I was stupid enough to keep doing it because he said he’d never do it again, and he was stupid and he didn’t want to ruin our relationship. And he just used me and he stopped calling me, stopped calling me and just wanted me out of his life because I gave him what he wanted. I have his address. He lives in Canada, i know his cousins’ names, his family. His full name is Dakota William Shain Maxson. I know his phone number. I was just like, liking the attention he was giving me.

(Earlier this week, Maxson appeared in Vancouver, Canada court, on charges he sexually assaulted a minor—something police say is unrelated to the Amanda Todd case.)

“Viper” also make appearances in the videos and magazine under the screen name viper2323. Anonymous New Jersey has tied him to a man in Wisconsin, though it’s worth pointing out that much of their original information on Maxson, including his age and home address, turned out wrong.

From the digital traces left by the cappers, Viper appears to be a kind of black sheep of the group—a winner of both the “most annoying” award and, along with Maxson, the “Blackmailer of the year” award in 2010. The Daily Capper details his year-long obsession with a girl named “Verica,” and specifically his travails in obtaining “caps”—presumably nude photos—of her. 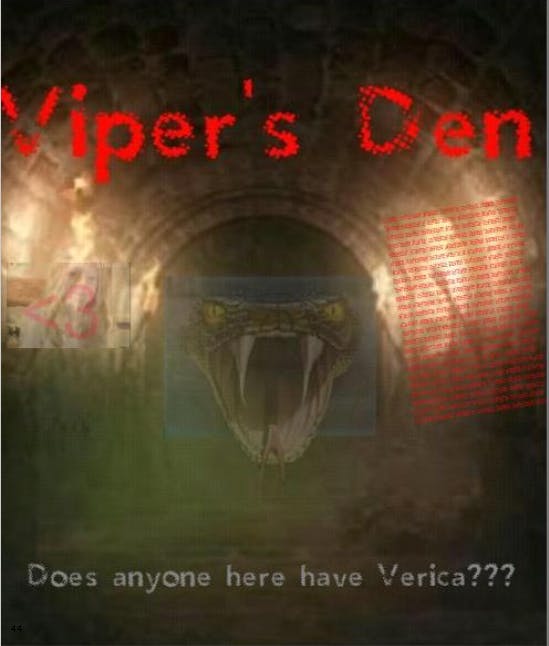 The actual identities of the cappers as a group are nebulous. We don’t know who produced the videos or magazines. Were the Daily Capper producers simply observers of the crimes, or participants? In one of the videos, a 32-year-old man with a Canadian accent calling himself Avery000 detailed his path to becoming a capper. Around 2006 he began taking video of adult performers on the professional site LiveJasmine, before a friend introduced him to other amateur sites. He soon became a leader in the raiding and blackmailing forums frequented by the group and was nominated for “capper of the year” in 2010.

I reached out to multiple people included in the magazine and awards list—based on screen names tied to social identities elsewhere on the Web, including both the girls and the alleged blackmailers. Unsurprisingly, I didn’t hear back from a single person. A tweet from Maxson’s account includes a screengrab of a message chat with someone called “Peyto.” I called that number, hoping it was Peyton, the girl who’d accused Maxson of blackmailing her. It had been disconnected.

In a YouTube video Todd published days before her suicide, she described years of harassment, including bullying from classmates not directly related to her sexual blackmail. Depression and suicide among teens are complex mental health issues, and it’s impossible to pinpoint a single event that launched Todd on her tragic path. But while media attention has focused largely on bullying, it’s missing another insidious problem: sexual predators who prowl video chat sites. As Vice’s Patrick McGuire noted: “more mainstream awareness needs to be focused on this form of extortion that is designed to destroy the lives of girls like Amanda Todd.”

Like the rest of their Web presence, The Daily Capper’s Twitter account is now silent, last active on July 11, 2010. What remains are links to old TinyChat rooms, where presumably the cappers staged raids on unsuspecting girls, waiting for them to make the mistake that would ruin them. Those rooms are long-dead.

Where have the blackmailers gone?