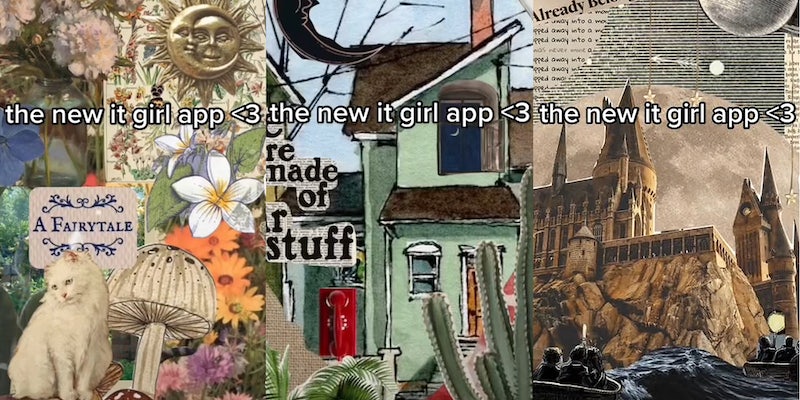 The platform inspires creativity over competition.

If you haven’t heard of Shuffles already, it’s about to become unavoidable. Shuffles is the latest app from Pinterest that was first released on the App Store in August. In a short time, it has garnered mass popularity amongst Gen Z users—despite the app currently being invite only.

Shuffles is a collaging app that connects to your Pinterest account, allowing you to create collages using pins on your boards. You can also search for pictures, add images from your camera roll, and use pre-made cutouts. You can post your completed collages, allowing other users to like, comment, share, and “reshuffle” your collage. Similar to TikTok, there is a “For You Page” that becomes more refined the more you create and interact in the app. You can also view trending collages as well as recent uploads.

As part of Gen Z myself, my phone has been flooded with friends trying to find invite codes to Shuffles and social media users with access gushing about how much they love the app. So why has the app gained so much attention already, despite still being in beta?

What grabbed my attention initially when hearing about the app is that it manages to combine the creative curation that Pinterest is known for with the community engagement features that we expect of other social media platforms. Essentially, it’s the best of both worlds in terms of user experience.

While Shuffles is new, it’s also reminiscent of websites such as the now-defunct Polyvore. User creations also share similarities to the Tumblr mood boards and collages that every teenager had as their phone wallpaper in 2014. Shuffles appeals to nostalgia for this era, offering another explanation as to why so many young people are enjoying the app. Instead of reblogging Tumblr collages with pastel pinks and The 1975 lyrics over the top in italicized Helvetica, now I’m sharing collages on Shuffles with Phoebe Bridgers lyrics in typewriter font alongside aesthetic pictures consisting of dark reds and greens. It provides a new experience and outlet for people who are nostalgic for these older platforms.

One Shuffles user, Lila, shared in an interview that she enjoyed the app because “it’s just so user friendly and well designed, [I] also love that it links directly to Pinterest because I’ve been using my account on there for years!”

The hype around Shuffles is another indication of the shift in consumer interests in the social media industry. BeReal, an app praised for its authenticity, shows that users are looking to connect more with friends rather than influencers and brands, signaling a step away from the heavily constructed feeds of apps such as Instagram.

Shuffles is inspiring rather than envy-inducing. As I use the app more and more, I look at other users’ Shuffles to inspire my next. The platform is focusing more on the idea that it’s not what you are like, but rather what you like. With users connecting over mutual interests and artistic likes rather than the appearance and presentation of the user themselves.

This sentiment is echoed by another Shuffles user, Aimee, who said, “I love that it lets me share my favorite characters [and] shows.”

So far, Shuffles seems to be community-focused rather than creator-focused. No one is on the app to see one specific person’s collages. Most are there to create themselves and see what their friends make. Shuffles’ design appears to deemphasize the individual creator and encourage communities to exchange art featuring their shared interests and tastes. With many Gen Z users searching for community online, Shuffles feels like a creative haven away from the pressure to be perfect on other platforms. In recent years, apps such as TikTok and Instagram have been used by many to show aspirational aesthetics and lifestyles through carefully selected videos and pictures (even if users claim it to be a “photo dump”). Posting has become meticulous work, often seeming more like a chore than amusement.

The appeal of the app boils down to one, crucial thing: fun. That’s the word I’ve seen used most by users when describing what they enjoy about the app. It’s fun and engaging. Its social features allow you to follow your friends, and anyone else whose designs inspire you. You can also chat to friends through direct messaging, and send them Shuffles that aren’t publicly visible on your profile. You can also create group chats for you and your friends to send creations to each other. My friends and I have given each other a theme to create collages off of, and then sent the finished products to each other in a fun creative pastime.

You can also follow hashtags so you can engage with content you find enjoyable. Perhaps you want to be involved in a certain fandom, or your favorite color is red so you want to see more red collages. These hashtag follows are allowing users to connect over similar interests. Watching new ideas come to life on the app and experimenting with collage design is enjoyable and exciting compared to my user experience on apps such as Twitter or Instagram where, after a while, I find myself bored and uninspired.

It feels as though Shuffles is an app where ego is not at the forefront of it—but of course, apps are what users make it. Although the app is still in its early stages, Pinterest shared with Passionfruit that they’re “continuously experimenting with new ways to help Pinners and Creators bring their ideas to life.” But if the Shuffles team continues to listen to users about what they’re enjoying, and keep user experience at the heart of development, it feels as though the only way is up.

Ultimately, Shuffles has a lot of potential, and it seems Pinterest has hit the jackpot on what Gen Z users want. It also appears to be capitalizing on the shift within social media toward community-oriented interactions and authenticity. Still, only time will tell whether or not Shuffles has what it takes to become a fan favorite amongst the biggest generation of social media users.

Catherine Shuttleworth is a freelance culture writer. Her work has been published in Mashable, The Independent, Metro and more.