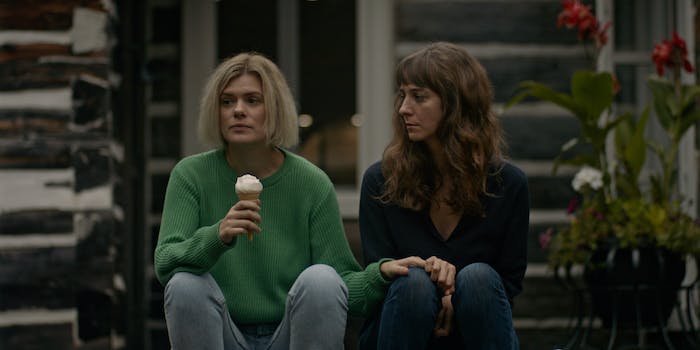 ‘Violation’ shows a different side of a revenge fantasy

Co-director and co-writer Madeleine Sims-Fewer stars as a woman pushed to revenge.

Very little of Violation, a surreal and thoughtful look at the revenge-fantasy movie, makes sense at first (some of which is by design).

Release Date: March 25, 2021
Directors: Madeleine Sims-Fewer and Dusty Mancinelli
Streaming: Shudder
One woman’s visit to her estranged sister’s home culminates in trauma, which eventually drives her to getting back at those who betrayed her.

Every now and then, we’re shown a seemingly random shot of a wolf picking up a rabbit or a fly on a person’s thumb. The film cuts back and forth, showing us one transgression and then following it with the catalyst to that event; sometimes, the color of the leaves alludes to the passage of time. In one scene, two people are happily bonding over the emotional strife in one of their lives; the next, one of them views the other with disdain.

The time jumps can make you feel disorienting, and it certainly takes you some time to really get settled in with things. While Violation is often intimate, it can also sometimes feel like it’s lacking something; some characters are barely fleshed out at all. But a powerhouse performance from Madeleine Sims-Fewer (who also co-wrote and co-directed the film) immerses you deep within the mindset of a woman who takes revenge for herself—and what that can do to a person.

When we first meet Miriam (Sims-Fewer), she’s already in the midst of pretending everything is fine. She’s on the verge of divorcing her husband Caleb (Obi Abili), but they go and visit Miriam’s estranged younger sister Greta (Anna Maguire) and her husband Dylan (Jesse LaVercombe) at their house in the middle of nowhere. She can’t really voice many of her problems to Greta, but Miriam is able to connect with Dylan; they explore the terrain around them, they can reminisce with each other, and they can bond over a campfire. But soon it heads in a disturbing direction, one that isolates Miriam even further.

The revenge-fantasy genre as a whole is one that’s largely focused on the emotional aftermath of the trauma that sparks revenge or takes us through one person’s plans for revenge, but we’re not always left to face the aftermath of the revenge itself. We don’t watch the characters have to clean up after themselves, or sit with the decision they made, no matter how much time was spent coming to that conclusion; maybe they might have flashes of regret. In Violation, we stay with Miriam long after her revenge takes place.

We watch Miriam as she’s left with the gravity of what she’s done and we’re taken through each step of the aftermath. It’s meticulous and clinical, and, in a sense, we almost spend too much time with it. But, every so often as we watch the emotions briefly flicker on Miriam’s face. She never monologues or voices her feelings on the matter, but her face speaks volumes, depicting bouts of her anguish, fear, or guilt. Revenge might offer some sort of solace in that moment, but it’s usually a lot more complicated than that; Miriam now has to live with it.

Violation is now streaming on Shudder.