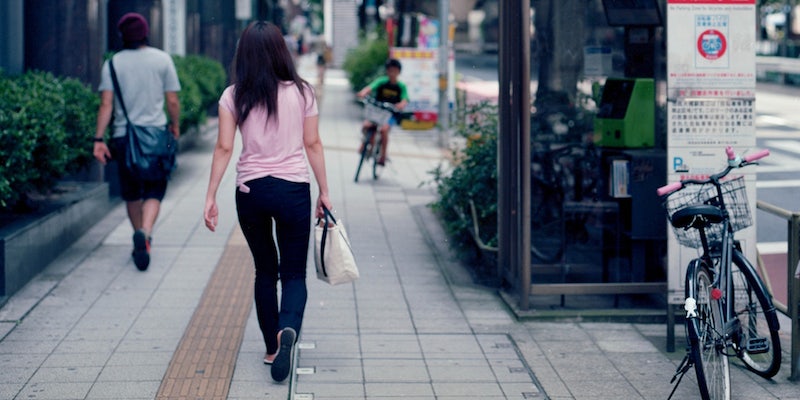 Should we outlaw catcalling?

Street harassment is an epidemic, but here's why the police won't solve anything.

Street harassment is dismally common–a recent study commissioned by the organization Stop Street Harassment found that 65 percent of the women surveyed had experienced it.

But up until recently, most strategies to stop harassment have focused on the victims. For example, the Hollaback app allows people who experience street harassment to document the incidents on a map, perhaps helping others avoid areas where lots of harassment occurs. And then there’s the usual, mostly-useless advice: don’t wear this, don’t do that, don’t walk alone.

However, that’s starting to change: some cities are adopting laws that attempt to criminalize street harassment. For example, a new proposed ordinance in Kansas City would make it illegal to purposefully frighten or injure a pedestrian or cyclist and lists a number of behaviors that would qualify, such as “threaten such person” and “place such person in apprehension of physical danger.”

It’s heartening that city officials are starting to take the issue of street harassment seriously. It’s a strain on individuals’ mental and physical health and creates a hostile, unwelcoming environment for women and gender non-conforming people whenever they leave their homes. Passing an ordinance that bans street harassment can send the message that this is wrong and will no longer be tolerated, thus indirectly helping to change the social norms that make street harassment so common.

But as much as I want to be optimistic about this, I’m not sure that these laws will be effective. For starters, enforcing them is probably impractical. Suppose you get harassed by someone on the street. You immediately call the police. They arrive. By then, the harasser is long gone. You give them a description. Now what? The likelihood that the police will prioritize locating a catcaller based on a physical description when there are so many other, more physically violent crimes to investigate seems low.

Moreover, we live in a society in which many people still insist that catcalls, even when made with a threatening tone and body language, are “compliments.” Such perceptions make a difference when it comes to law enforcement, even though many people still believe that police officers are objective enforcers of the law. (If the events in Ferguson haven’t changed their minds about that, I don’t know what will.)

Many sexual assault survivors report that the police refused to pursue their allegations. Some even intimidate or threaten the survivors to convince them to recant those allegations. Why wouldn’t this happen with street harassment claims, which most people probably take even less seriously than they take claims of sexual assault?

The wording of the proposed ordinance may not even include many instances of street harassment. Someone mumbling “nice tits, slut” while leering at a woman would not be breaking the proposed law. Someone saying “fuck you, cunt” when the woman walks away wouldn’t be breaking it, either, as long as they don’t make “loud or unusual sounds” in the process.

Trying to get the police involved in situations like this would likely lead to lots of rules-lawyering about whether or not it was really threatening or really yelling or really placing the person “in apprehension of immediate physical danger.”

While the law may be useful for situations in which someone is clearly making a threat of violence against someone else, there are other ways to hurt someone besides physical violence. A lifetime of hearing “nice tits, slut” while going about one’s business can be just as harmful as hearing one threat of physical violence.

Finally, laws criminalizing street harassment would probably work the same way many other laws do in that they would disproportionately impact people and communities of color. This isn’t because people of color are more likely to be street harassers than white people are, but because the police would target those communities for enforcement. The police may also believe accusations of street harassment made against men of color that they wouldn’t believe if made against white men. None of that requires a conscious desire to discriminate against men of color, by the way. Implicit racial bias is enough to make that happen.

Once arrested for sexual harassment, people of color would also face harsher sentencing than white people arrested for equivalent crimes. They would also be subject to police violence in ways that white people in this country are usually not. Recent incidents such as the shootings of John Crawford III and Darrien Hunt and show that black men are at risk for police violence even when they are not breaking any laws.

So, as furious and uncomfortable as I feel when I get catcalled, I would feel even more uncomfortable about calling the police if the person who did it happens to be a man of color.

If laws won’t stop street harassment, what will? It’s hard to say without more research. One low-cost tactic may be poster campaigns and public service announcements that frame street harassment as inappropriate and intolerable. Some would probably be skeptical of such an intervention; after all, why would the sort of person who would catcall a woman pay attention to a sign?

But signs and PSAs might be helpful for resetting social norms and discouraging inappropriate behavior. A street or subway car full of anti-catcalling posters sends the message that catcalling is socially disapproved of. When personal ethics are lacking, social disapproval can be a powerful deterrent.

A more intensive but ultimately more impactful strategy would be to start educating young people about sexism, street harassment, and gendered violence. I did not receive any formal education about any of these things prior to college, and even then it was only because I chose certain courses. Sexual harassment is about as common in middle and high schools as it is on the streets. Why should we expect these harassers to suddenly change their behavior upon reaching adulthood?

Parents and teachers should proactively address this issue with children and teens, and that starts with refusing to keep dismissing it as “just a compliment” or “just boys being boys.”

Laws like the proposed Kansas City ordinance are probably more useful as a barometer of opinion than as a deterrent for bad behavior. The fact that such ordinances are being passed in multiple cities is a sign that people with power are starting to take street harassment much more seriously. I hope that they will use this newfound awareness to continue to implement measures that will reduce street harassment, especially measures that do not rely on the criminal justice system and that seek to change behavior rather than simply punish it.